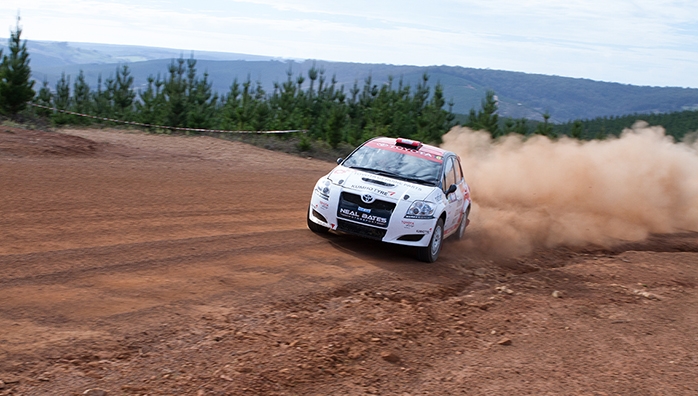 Second-generation racer Harry Bates has blown pre-rally predictions out of the water at the Quit Forest Rally, taking Heat One victory in Nannup Western Australia, while one of the leading crews saw their car go up in flames.

Contesting the Forest Rally for the first time, and only his fifth Australian Rally Championship event, the result was unexpected even for Bates, who aside from testing on Wednesday, had never driven on the slippery ball-bearing roads the area is famous for.

In a tight finish he beat Simon Evans by just 1.1-seconds.

“This is better than we could have hoped,” said Bates after scoring his first ever heat win in the ARC.

“Realistically I thought a top three finish was possible but even that could have been a struggle given the level of depth in the Championship, so to go and win a couple of stages this morning was a bit of a surprise and something that I had to manage this afternoon.”

Running as the fifth car on the road, Bates took full advantage of the swept roads throughout the morning stages extending his lead to 21.4 seconds by the conclusion of SS6, before an off-road excursion on SS7 had him worried that he’d blown it all.

“I almost threw it all away, I just came down and un-braked myself plain and simple,” said Bates.

“I remembered the corner from the first pass and thought potentially I could brake a little bit later, but not that late, so went off the road about 20 or 30 metres.

“At the time I thought I had cost us the Heat but we had a really good run through Ferndale (SS8) and then held ourselves together over the short stages around Nannup.”

Four-time Australian Rally Champion Evans pushed Bates throughout the day but had the difficult job of being first car on the road and sweeping the surface for the rest of the field.

They finished Heat One in second outright.

“I feel satisfied, we drove hard and we had a bit of a disadvantage sweeping the roads but that’s just part of being car one on the road,” Evans said.

“Harry did a great job, my hat goes off to him because you have to be a decent driver to get a good result here and he’s proven he’s got the talent.

“Hell he might even be better than his dad (Australian rally legend Neal Bates)”, Evans he joked.

On a big day for the Bates family, Harry’s father Neal took the Australian Classic Challenge finishing more than five minutes ahead of John Ludlam in second with Andy van Kann.

The car was totally destroyed in the blaze with Markovic treated for mild facial burns at Bunbury Hospital. Macneall was unharmed in the incident.

The pair was sitting second overall when disaster struck.

“We came over a crest on stage four and I saw flames out of the corner of my eye. I told Brad to stop straight away,”said Macneall.

The pair flagged down the next competitors before official fire and medical crews attended the scene and the stage was stopped.

Markovic said the fire was instant and started without warning.

“We had an exhaust issue in stage three and this may have contributed to the fire. We were 16km into stage four when it happened,” said Markovic. The Brad Markovic Subaru goes up in flames