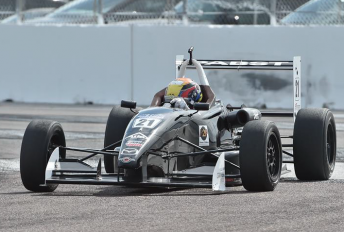 Australian Formula 4 champion Jordan Lloyd is setting his sights on a USF2000 title push following an impressive start to his maiden full season in America.

Having signed a deal with Wisconsin-based Pabst Racing, Lloyd has wasted no time in stamping his mark on the Road to Indy series with victory and a second place finish at the St Petersburg season opener last month.

The 20-year-old, who finished runner-up in the 2014 Australian Formula Ford Series, contested four USF2000 races last year before focussing on his Formula 4 campaign.

Lloyd headed into the second round at Barber Motorsport Park this weekend leading the standings before extending his advantage to 12 points with a fifth place in yesterday’s Race 1.

“We are definitely going to be pushing to try and win the championship this year,” Lloyd told Speedcafe.com.

“Its been pretty good. I think myself and the team have been getting along pretty well.

“We definitely had our goals set high this year coming off how we went last year.

“It is just a really good feeling to put it into motion and be quick enough to win.

“It is definitely a big leg up and a confidence boost. We were quick last year and to be able to come over here being in a different car and carry that on as well is great.”

Lloyd has taken inspiration from fellow Toowoomba racer and 2014 IndyCar champion Will Power.

Running alongside the IndyCar Series this year, the young Aussie hopes to extract advice from the Penske driver as he looks to climb up the Indy ladder.

“It’s good to be able to walk around the paddock and see people like Will Power, which is huge for myself as he came from my hometown,” added Lloyd.

“I look at him and think that is where I want to be. He has done it so now I want to be able to do it.

“I’ve talked to him before when he has come back to Australia over the IndyCar break.

“He has given me bits of advice here and there. He is a good guy and is very supportive in what we are trying to do.”

Lloyd will be in action later today for Race 2 at Barber Motorsport Park.