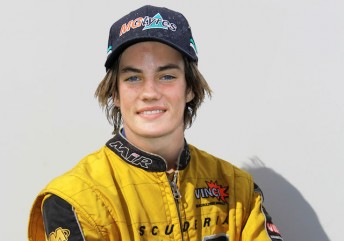 Sidebottom, the reigning KA2 Australian champion and current KA1 Australian Kart Championship leader, will join the Scuderia PCR Australia team from the third round of the championship.

The 15-year-old is set to link with the team under the Reevu Motorsport umbrella next month.

“Tommy Gallo (Scuderia PCR Australia boss) is someone who focuses on giving his drivers the best opportunity at success in a very tight-knit team, Sidebottom said.

“The opportunity to drive with Reevu Motorsport came out of the blue just before the opening round in Dubbo and one that I’m very thankful that came along.

The new arrangement provides a pathway for Sidebottom to graduate into the KZ2 ranks in 2017.

He will soon begin a testing program aboard a KZ2 kart in between his KA1 commitments to prepare him for next year.

“Reece’s results last year in KA2 was very impressive, as has his start to the 2016 Championship in the KA1 class,” Gallo said.

“He is a true talent and one that I’m very excited to have in the Scuderia PCR Australia team.”

The third round of the Australian Kart Championship is scheduled for the Monarto Karting Complex, South Australia, from May 13-15.