Home » News » Bikes » Rossi: Lorenzo will be competitive at Ducati

Rossi: Lorenzo will be competitive at Ducati 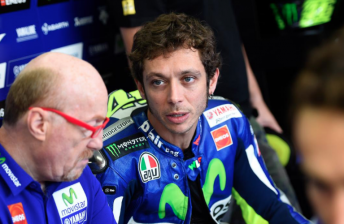 Valentino Rossi expects Jorge Lorenzo to enjoy a more successful period at Ducati than he managed during a disastrous two-year stint with the manufacturer.

The nine-times world champion scored just three podium finishes during his tenure at Ducati as he struggled to adapt to a difficult Desmosedici bike during 2011 and 2012.

Following the news of Lorenzo’s switch from Yamaha to Ducati this week, team-mate Rossi believes the reigning world champion will be competitive next season.

Ducati has been steadily improving its MotoGP efforts but the operation remains without a race win since Casey Stoner’s triumph at the 2010 Australian Grand Prix.

“When I arrived at Ducati, the bike was very different compared to all the other bikes. It was another concept,” said Rossi.

“It looks like that the Ducati in the last two years has improved a lot and is a competitive bike, it’s for sure very different to Yamaha.

“I know the skills of Lorenzo to ride and I think that he will be competitive with Ducati.”

Lorenzo, who enjoyed three world championship and 41 race wins with Yamaha, has labelled the decision to leave the Japanese marque as the most difficult of his career.

Rossi and Lorenzo will join the MotoGP field for today’s practice ahead of this weekend’s Spanish Grand Prix.

Previous Story Price withdraws from Qatar with back injury