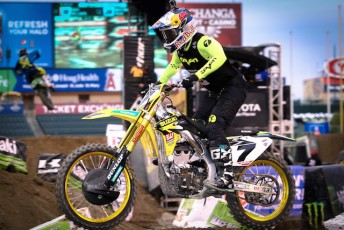 Following a challenging 2016 Monster Energy AMA Supercross campaign, James Stewart has announced that he will bypass the final three races of the season.

The Yoshimura Suzuki rider said he would now shift focus to the upcoming Lucas Oil AMA Pro Motocross Championship which opens in California, as he rests up from recent injuries.

“I want to be out there racing,” Stewart said.

“My fans and sponsors are important to me, but ultimately I need to focus on getting completely healed up and be solid and ready to go the next time I roll up to the starting gate at Hangtown (California).”

Stewart’s woes this season began during the opening round in Anaheim when an inadvertent collision with defending champion Ryan Dungey left the #7 Suzuki mounted rider with concussion.

Since Anaheim, Stewart has been involved in multiple crashes, leaving him without a top 10 finish this season.

A crash during round 14 at St Louis last weekend left Stewart with a fractured ankle and a flare up of a niggling back injury.

The two-time World Champion is expected to return at the 2016 Lucas Oil Pro Motocross opener in Hangtown later next month.

Previous Story Rossi: Lorenzo will be competitive at Ducati