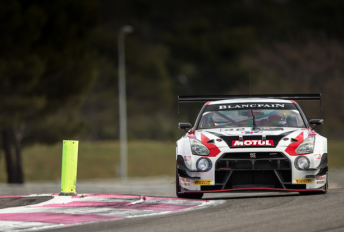 The Nissan GTR Matt Simmons will pilot at Monza

Gamer turned racer Matt Simmons will embark on his professional racing career this weekend when he tackles the Blancpain Endurance Series opener at Monza.

The former postman from Brisbane has landed a coveted contract with Nissan’s factory GT3 squad after seeing off a selection of the world’s best gamers to win the renowned GT Academy competition.

Since receiving the life changing prize Simmons has been gearing up for his Nissan GT-R GT3 race debut by completing a two day test at the Paul Ricard Circuit in France last month.

Following the test Simmons headed to England for a pre-race training camp to complete his final preparations for Monza. 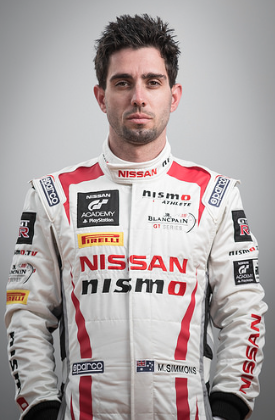 “Since hopping out of the Nissan GT-R GT3 at the Paul Ricard, I have been counting down the days until Monza,” said Simmons.

“We learnt a lot over those two days which will really help towards this race weekend.

“Arriving in the UK for the Nismo pre-race training camp has been great. There is a lot of excitement building between us and some nerves creeping in too.

“The first race of your career is always special and to drive at Monza with so much racing heritage is a tick of the bucket list.”

Set to compete against a field of GT racing’s elite drivers, the Brisbane-based racer says finishing the race is the immediate priority.

“We will be learning and pushing to get the best result but for us, the most important outcome will be to finish and see that chequered flag on Sunday,” added Simmons.

“To taste champagne would be a nice bonus too.

“It has been an incredible journey to this point and I know I will have a lot of support from Australia riding along with me this weekend.”

Simmons will be joined on the grid by V8 Supercars star Shane Van Gisbergen, who will pilot a Garage 59 factory McLaren 650S.

Fellow Queenslander Liam Talbot is also set to compete in the race where he will drive a Kessel Racing Ferrari 458 GT3.

Qualifying is scheduled to begin at 1700 AEST on Sunday with the race due to start at 2200 AEST.