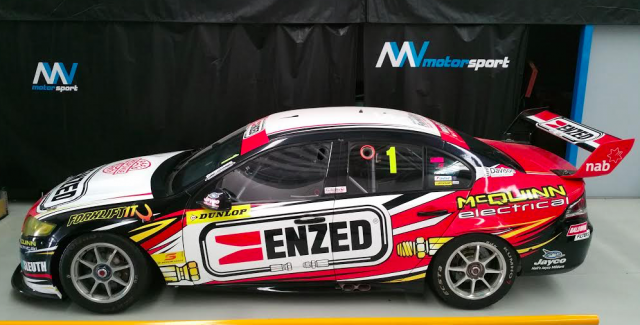 The ex-Waters car at MWM

Cameron Waters’ Dunlop Series winning Ford could be back on the grid as soon as Barbagallo after sitting out the opening two events of the new season.

The car was purchased by MW Motorsport over summer, adding to the Melbourne-based squad’s now four-strong stable of Prodrive-built FG Falcons.

Waters took the chassis to 10 wins and 15 top three finishes last year from 16 starts on his way to the title.

Team owner Matthew White says he’s in discussions with potential drivers to race the car at the next round of the series at Barbagallo on May 6-8.

MWM started the year with three cars in Adelaide, but ran just two at Phillip Island after Jesse Dixon failed to raise the budget to continue.

The team is fielding Shae Davies and Bryce Fullwood for the full season, with the latter temporarily campaigning the ex-Dixon car while his own is repaired from its Adelaide crash.

White told Speedcafe.com that he’s eager to run the ex-Waters car in the Dunlop Series, but could also expand back into the Kumho Series if the right deal is on offer.

“Prodrive were keen to move it on and it makes sense for us because it runs all the same gear as our cars,” White told Speedcafe.com of the Waters car.

“It’s there ready to go, we’re just looking for the right driver to step into it and do a solid job.

“We’re talking to a few guys about Barbagallo, which is a track where we scored pole last year and have traditionally been pretty strong at.

“Three cars is the ideal model for us as a business in the Dunlop Series, but the option is there to run Kumho as well.”

MWM ran Fullwood’s own ex-Paul Morris Motorsport Holden Commodore VE in the opening Kumho round at Sandown last month in a bid to give the youngster experience at the Victorian venue.