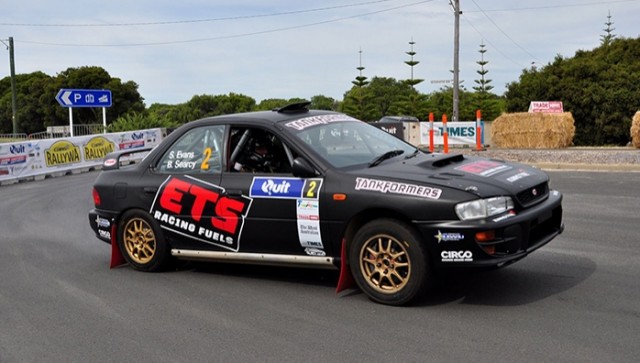 Simons Evans heads the ARC field after the Busselton stages

Simon Evans has got the jump at the opening round of the Australian Rally Championship, the Quit Forest Rally, heading the 42 crews around Busselton Foreshore in Western Australia.

However, he was not the fastest on the stage with Neal Bates, contesting the Australian Classic 2WD Rally Challenge, proving the one to beat out of the entire field, posting the two fastest times of the night. If Bates was contesting the ARC he would be leading Evans by almost four seconds.

In the ARC, Evans holds a 1.7-sec lead after the twin tarmac runs with Saturday’s action in the forests around Nannup ahead for crews.

Mark Pedder was quickest out of the blocks on the opening 2.71 kilometre stage followed by Evans and Harry Bates.

Evans took the honours in the second run followed closely by Western Australian Brad Markovic and Bates. Pedder dropped 2.4-sec to the leader on the second run which placed them back in fourth.

The competition will head to Nannup where teams will contest a further eight stages on Saturday in a bid to take Heat One honours.