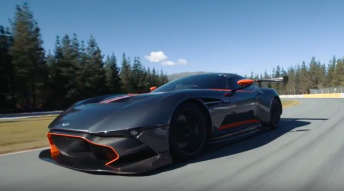 Quinn’s Vulcan on track at Highlands

One of 24 examples worldwide and the only one in the Southern Hemisphere, the bespoke track-only weapon is said to be the highest priced production car to be sold in New Zealand.

The car’s track debut coincided with the third anniversary celebrations for Highlands Park with 10 ride experiences made available including two charity rides.

Quinn’s laps went ahead despite a glitch that required an Aston Martin technician to make a rapid dash from the United Kingdom to replace the car’s computer.

The Vulcan will be on public display until September at the acclaimed National Motorsport Museum located at the circuit.