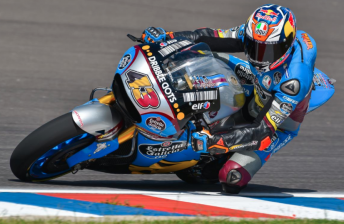 Jack Miller will return to competitive MotoGP action at this weekend’s Spanish Grand Prix after being sidelined from the Austin round with injury.

The Marc VDS Honda rider was forced to sit out the championship’s third round at the Circuit of the Americas after sustaining a broken bone in his right foot, caused by a crash in practice.

Ruled out of the race, Miller elected to stay in America for a week, where he worked with medical professionals to ensure he is ready for this weekend’s race in Jerez.

“It’s never good to have to sit out a race through injury, as I had to in Texas, so I’m looking forward to getting back on the bike in Jerez,” said Miller.

“After Austin I stayed in the US, where I’ve been working hard on my rehabilitation with Doctor Andy Walshe, ready for the European phase of the season.

“The next few weeks are tough, with races coming one after the other, starting this weekend at the Spanish Grand Prix.”

Miller will jump on board his Marc VDS Honda when practice begins on Friday.