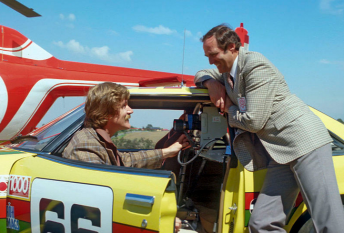 From 1979, millions of Australians became fixated by the pioneering in-car camera that weighed upwards of 70kg in Williamson’s car.

“Peter was the ideal choice as Seven’s Racecam pioneer back in 1979 and he helped revolutionise in car camera coverage that we see today,” said Raymond.

“Geoff Healey, the brains behind Racecam, told Peter he had installed a microphone purely to get his thoughts on the race from time to time during the telecast so Peter talked non-stop for seven hours, which made the race riveting entertainment.

“We all loved the wise cracking ‘Willo’. He was one in a million.”

Williamson told the Shannons website in 2013 that he did not hesitate when the Racecam opportunity was initially presented to him.

“Two blokes, John Porter and Peter Larsson, approached us at Amaroo Park when we were standing around at a barbeque after a race meeting there,” Williamson recalled.

“They said they had this idea for an in-car camera but Brocky and the rest didn’t want anything to do with them.

“Anyway, I listened to what they had to say and it took me about 40 seconds to make a decision and we took it on.

“They did say it would require a fair commitment from us and that they’d need a fair bit of our time to help develop it and make it work, because it was just an idea at that stage.

“Eventually Channel Seven agreed to fund its development and I remember going out to Oran Park every other week driving around and around with helicopters flying overhead as they experimented with different links and cameras and all that.

“It took a fair amount of time to work it all out.”

Williamson’s Bathurst class wins in 1979 alongside co-driver Mike Quinn and in 1981 with John Smith were separated by a failure to finish in 1980 that was blamed on the Racecam draining the car’s alternator.

VIDEO: Williamson looks back at Racecam in 2015