On a weekend dominated by talk of star driver Scott McLaughlin potentially leaving GRM at season’s end, the 20-year-old Golding enjoyed a career best outing in the second-tier series.

Scoring victory in Race 2 on the way to second for the round, Golding moved to second in the series standings behind Prodrive’s Garry Jacobson.

Team owner Rogers is known to be assessing Golding for a slot in his squad’s Pirtek Enduro Cup line-up for this season following Alexandre Premat’s move to Triple Eight.

While such a high profile co-driver’s seat would be a major ask for a main series rookie, the quietly spoken Golding says he’d relish the opportunity.

“I’ve been concentrating on my consistency since last year and I think I’ve improved a lot,” Golding told Speedcafe.com.

“I’m not trying to push and focus on that (enduros) so much, I’m just doing the best job I can do in the Dunlop Series.

“I’ve just got to push hard and if I am lucky enough to get a run I think I’ll be ready for it and I’m sure I’ll do a good job.

“We (Garry and I) haven’t spoken about it yet but I’m sure he’ll make up his mind sooner or later.

“It’d be awesome to do it and great for my career, so hopefully I’ll get the chance to do it.” 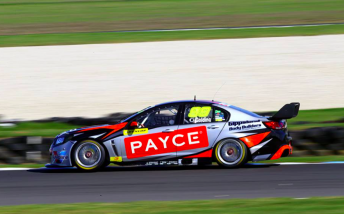 Although there remains much to play out for McLaughlin’s own 2017 plans, Golding potentially looms as a home grown replacement for the 22-year-old should he move on.

Working as a mechanic at GRM, Golding is the latest in a long line of young talent that has been nurtured through Rogers’ team.

Golding stepped up from Formula Ford to the Dunlop Series last year, finishing 10th in the standings aboard a 2012-build GRM Holden.

The youngster admits he’s surprised himself with the pace he’s shown in the newer Car of the Future chassis this year, giving him hope he could be in the frame for a main series call-up should a seat become available.

“I think it’s a possibility, but again I’ll push as hard as I can and if it happens, it happens,” he said when asked if he will be ready to move up at the end of the season.

“If there is a chance there with GRM in the main series, hopefully Garry might give me the spot.”

The Dunlop Series continues at Barbagallo Raceway on May 6-8.

Next Story Mistakes no deterrent for charging Whincup