Ducati yet to decide Lorenzo 2017 team-mate

Ducati yet to decide Lorenzo 2017 team-mate 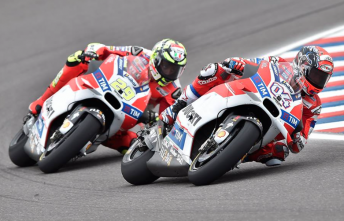 Ducati sporting director Paolo Ciabatti says the team is yet to make a decision as to who will partner Jorge Lorenzo next year.

The Italian manufacturer confirmed the appointment of the reigning world champion on Monday with the Spaniard set for a two-year deal.

The switch sees Lorenzo leave Yamaha where he scored three world championships and 41 race wins, since stepping up to the premier class in 2008.

Lorenzo’s arrival has left Ducati a difficult decision regarding its second seat for 2017, with current riders Andrea Dovizioso and Andrea Iannone out of contract at the end of the season.

Ciabatti says he has spoken to both riders along with Lorenzo, who has no preference on the identity of his new team-mate.

“We have not decided yet,” Ciabatti told Sky Italia.

“First we wanted to ensure the signing of Lorenzo. Now we will wait to decide whether Iannone or Dovizioso stays.

“The two are exceptional and it will not be an easy choice.

“We have spoken to both of them and I don’t think the uncertainty over their future will affect them.

“We spoke with Jorge and does not care which one is his team-mate.”

The MotoGP world championship returns this weekend with a visit to Jerez for the Spanish Grand Prix.