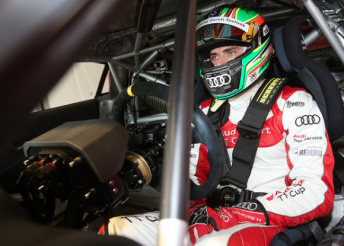 The Italian has been installed as a replacement for reigning Australian GT champion Christopher Mies.

A hectic 2016 schedule will see Mies committed to a clashing Blancpain GT Series round at Brands Hatch from May 6-8.

A former champion skier, he brings a wealth of experience to the grid having raced in GT and LMP1 factory Audis.

The 31-year-old drove Audi’s third R18 entry at the Spa 6 hours and Le Mans 24 Hours for the last two years.

Bonanomi finished third at La Sarthe for the Ingolstadt maker in 2012 alongside Oliver Jarvis and Mike Rockenfeller.

Last year he dovetailed the LMP1 commitments with a full season in the Blancpain GT Sprint Series.

“I’m really excited to race for the first time in Australia, and to have to opportunity to work with the Jamec Pem Audi Customer Racing team,” said Bonanomi.

“I’ve heard a lot of good things about the team and can’t wait to join them and help their fight for the championship.

“I think he’ll bring something new to the team,” said Russell.

“Every time we’ve had a factory driver, they’ve fitted into the team well and they’ve been fast.

“I don’t think Marco will be any different and we look forward to going racing with him.”