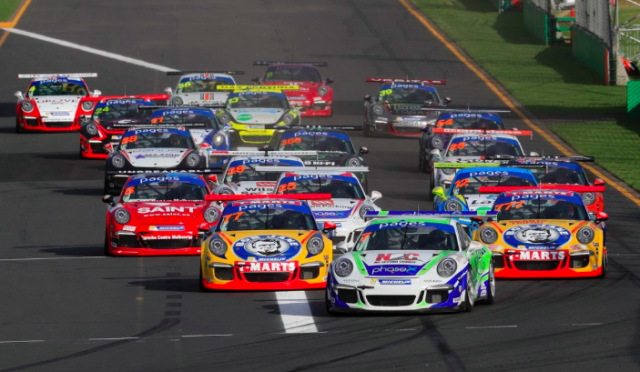 A seven-strong pack of V8 Supercars stars will be among the field for the Carrera Cup Australia’s showpiece Pro-Am round at Sydney Motorsport Park.

The line-up is, as revealed earlier this month, led by Red Bull’s Shane van Gisbergen, who joins Paul Kelly in a one-off entry from Scott Taylor Motorsport.

Van Gisbergen, Lee Holdsworth, Michael Caruso and Garth Tander will all be making their Carrera Cup Australia debuts at the April 30-May 1 meeting.

Caruso is set to line up alongside Marc Cini in what will be the Nissan Motorsport driver’s first race in GT-style machinery.

Tander, who has co-driven Aston Martins, McLarens and Audis in Australian GT during recent years, slots in alongside James Burgmuller.

While the amateur co-drivers will play a big part in the final race results, the all-Pro qualifying session will be particularly hotly contested between the V8 stars and category regulars.

With a brief drive of a GT-R GT3 his only previous GT experience, Caruso has already had two days of testing to acclimatise to the Porsche.

“It’s great that Nissan has allowed me to race with Marc because it’s a great opportunity to have some fun,” Caruso told Speedcafe.com.

“The car is really good to drive and I really enjoy the paddle shift, which is like the GT-R and something I’d like to see in our cars (V8 Supercars).

“There’s a lot to get used to not only with the rear engine and being left-hand drive, but probably the biggest thing is the tyre.

“All of us V8 guys will be pretty keen to be the top dog in the qualifying session, but when it comes to the race there’s a lot of different levels of driver.

“It’ll be a good, fun event with no pressure. Everyone is looking forward to getting out there and having fun.”

As previously reported, Holdsworth’s place alongside Stephen Grove comes after the withdrawal of Scott McLaughlin.

At the invitation of Volvo, the 22-year-old is expected to tackle a Scandinavian Touring Car Championship round at the Skorvde circuit on the same weekend.