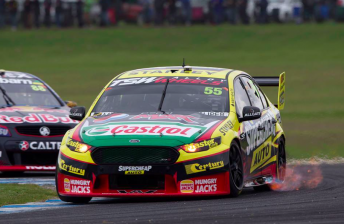 Mark Winterbottom has warned not to rule team-mate Chaz Mostert out of the championship picture despite the youngster’s rough start to the season.

The 24-year-old Mostert has endured a frustrating run since returning from injury and currently sits 16th in the standings, a full 259 points adrift of the lead.

Wildly fluctuating speed has seen three front-row starts and three qualifying results outside the top 10 across the opening seven races.

A third in Adelaide and fifth at Symmons Plains are meanwhile his only top six finishes, with a Sunday crash at the Clipsal 500 and tyre failure at Phillip Island particularly costly.

Team-mate Winterbottom has however been relatively consistent, bouncing back from a mediocre Adelaide to sit third in the standings behind Jamie Whincup and Scott McLaughlin.

“It’s the same guys year in, year out effectively that end up there,” said Winterbottom when asked of the championship picture following Volvo’s double win at Phillip Island.

“They (Volvo) have good tracks coming up, so for sure they’re in contention.

“You look at the Triple Eight cars, they’re in contention.

“I still think Chaz is in contention. He’s 16th, but when he flicks the switch he’s on.

Mostert had been Winterbottom’s biggest threat for the title last year before a season-ending crash at Bathurst.

Phillip Island meanwhile saw a continuation of Winterbottom’s car’s recent trend of qualifying strongly before struggling to keep pace in the latter stages of each stint in the races.

After leaving Adelaide and Symmons Plains with a heavy repair workload due to crashes for Chris Pither, Winterbottom says the team’s clean weekend at the Island will help its development focus.

“We’ve got work to do in the workshop, but it’s nice not to have damaged cars for once going back there,” he said.

“We can concentrate on development and not repairs.

“The boys are working hard so I’m looking forward to the next one.

“Perth has been good to us so fingers crossed we can get back up there and start winning races.”