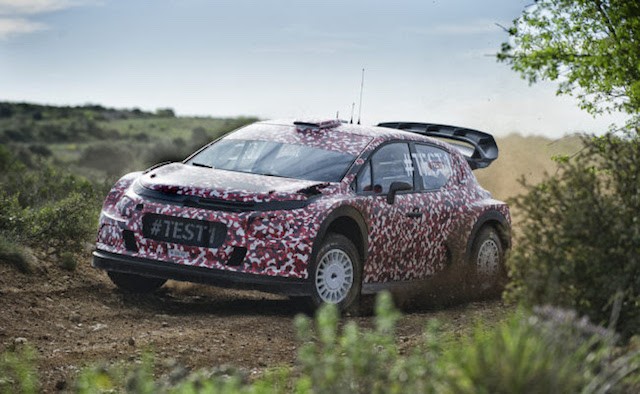 The WRC is moving to more aggressively styled machines with greater aerodynamic freedoms and beefier performance and exhaust notes that throws back to the Group B day of the 1980’s.

Kitted out in camouflage livery with a red, white and black pattern created by Citroën’s design office, Meeke spent valuable time in the machine before handing over the driving to Craig Breen.

“It’s always exciting to drive a car for the first time. But this is different, this is the start of a major new program for Citroën Racing and new era for the WRC,” Meeke explained.

When asked about the new car compared with the Group B icons of the past, Meeke said the WRC is clearly returning to ‘that spirit’.

“The cars were spectacular, with their bold design and big spoilers. We’re returning to that spirit, with more aggressively-designed cars but adding in the technological advances that we now have in 2016.”

The Northern Irishman said it was a dream to put the 2017-spec Citroen through its paces during the multi-day test.

“As soon as we set off, I felt that I was driving a genuine rallying machine, a well-designed car,” Meeke said.

“I have been involved in the development of several cars in my time; generally speaking, you spend more time waiting around than driving in the first few test sessions.

“But with this, I was able to rack up the miles and start to explore the set-up options. It was like a dream.”