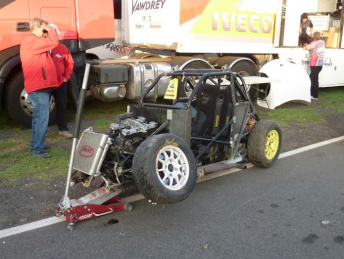 The wreckage of Chris Stevenson’s car

The driver was transported to Dandenong hospital on Sunday night when contact at the high speed Hayshed corner during Race 4 saw his car run wide before being pitched into a series of violent rolls.

Stevenson was knocked briefly unconscious in the crash before extricating himself from the wreckage under his own power.

The Victorian-born driver underwent X-Rays and a CT Scan in hospital where he spent the night as a precaution before being released yesterday.

Stevenson’s Advantage Motorsport team has issued an update on their driver via its Facebook page.

“Update on Chris, he has been released from hospital and is resting up with family in Melbourne before heading home,” read the Facebook post.

“He has some swelling to his eyes from the G-forces he was subjected to but doctors are confident the swelling will go down without intrusion.

“Chris again thanks everyone who reached out to him, his family and the team.

“Chris wants to get back on the horse asap, you will see the Hertz 88 on the grid at Darwin.”