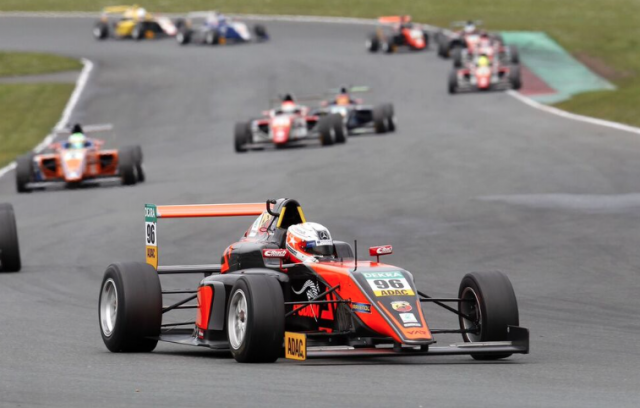 Joey Mawson on his way to victory in Race 1

Joey Mawson kicked off his German Formula 4 Championship campaign with two victories from the opening three races at Oschersleben.

Mawson then delivered an impressive drive from 10th in the reverse grid race to finish second behind race winner Mick Schumacher.

“It has pretty much been the perfect start to the championship. Two pole positions after qualifying, two race wins and a second placing,” said Mawson.

Mawson leads the standings by 19 points from Schumacher as the series heads to the Sachsenring for the second round from April 29- May 1. Matthew Brabham takes to the air

Matthew Brabham picked up a pair of podium finishes in the third round of the Stadium Super Trucks at the Toyota Grand Prix of Long Beach.

The grandson of three time F1 world champion, who started from pole position, opened up an early lead in Race 1 before he was hunted down by Sheldon Creed, who went on to take the flag.

Brabham, who will contest the Indy 500 in a Pirtek Team Murray entry, managed to fend off Tyler McQuarrie in the closing stages to claim the runner-up spot.

He backed up his performance by claiming third in the final race.

Countryman Paul Morris recovered from a spin to finish fourth in Race 1 before coming home in 10th in the final heat. 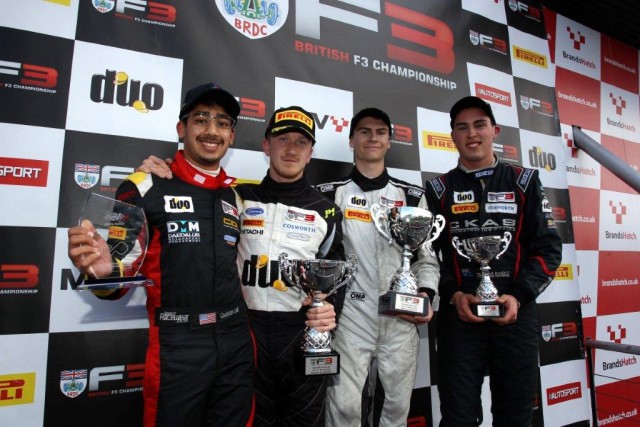 Australian Thomas Randle has climbed to third in the BRDC British Formula 3 Championship standings after recording his maiden podium at Brands Hatch.

Randle saved his best for the final race with the Victorian coming through to finish third, 1.3s behind race winner Colton Herta and Ricky Collard.

Fellow countryman Thomas Maxwell claimed three top 10 finishes to move up to eighth in the standings.

The series heads to Rockingham from April 30- May 1. 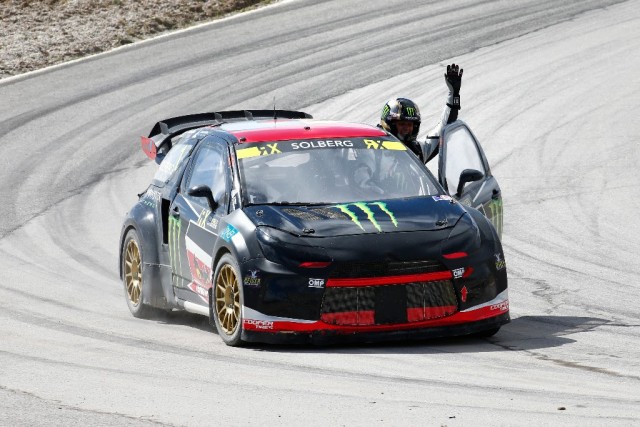 Petter Solberg opened the new FIA World Rallycross Championship with a victory at Montalegre in Portugal.

The two-time series champion came through to take the flag despite contact with Johan Kristoffersson’s Volkswagen Polo in the early stages of the final.

Despite the clash, Solberg powered on to victory ahead of privateer Audi Robin Larsson, while EKS Audi pilot Toomas Heikkinen finished third.

The championship heads to Hockenheim for the next round on May 6. Tiago Monteiro and reigning world champion Jose Maria Lopez shared the spoils in the second round of the World Touring Car Championship at the Slovakia Ring.

Bennani was left to settle for second ahead of Honda’s Rob Huff, with Lada’s Gabriele Tarquini and Citroen’s Lopez completing the top five.

Lopez emerged as the star of Race 2 as he reeled in leader Nicky Catsburg before passing the Lada driver on the penultimate lap.

Monteiro claimed second spot with Catsburg securing the final place on the podium.

Monteiro leads the championship by a point from Lopez ahead of the third round in Hungary (April 30- May 1). 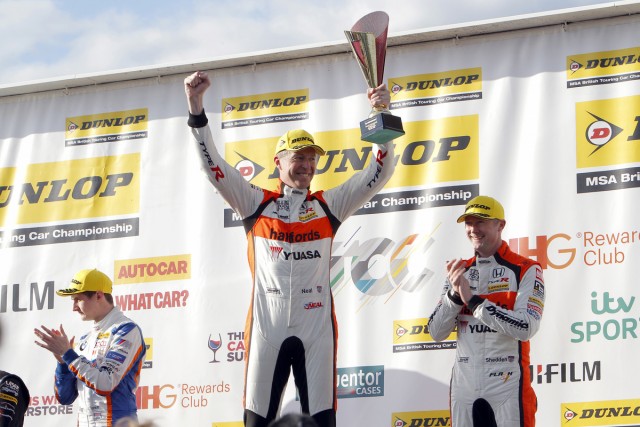 Matt Neal on the podium in Race 3 at Donington Park Pic: PSP Images

Matt Neal heads the British Touring Car Championship standings after recording a victory in the final race of the Donington Park round.

Neal now leads the championship by five points from Shedden.

The championship is yet to witness a double race winner this season as Motorbase Performance’s Mat Jackson took the chequered flag in Race 1, while West Surrey Racing’s Rob Collard was victorious in Race 2.

Jackson and the BKR Volkswagen of Aron Smith completed the podium in Race 2.

The championship heads to Thruxton for the next round from May 7-8. 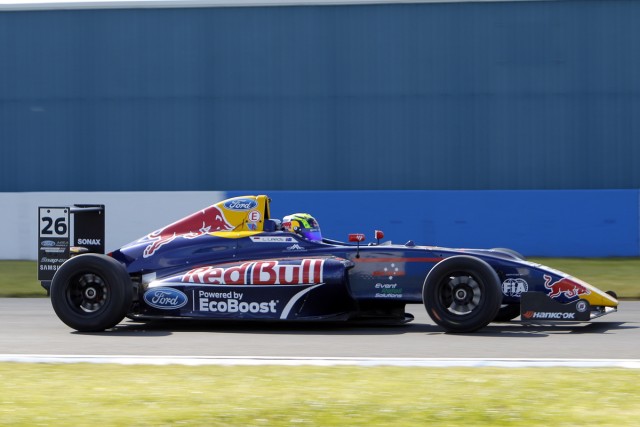 The Australian F4 graduate managed to adjust to tricky wet conditions as he followed home Alex Quinn in the opening race finishing just 0.5s adrift of the winner.

The Red Bull junior driver retired from Race 2 after an opening lap incident before bouncing back with a second in the final race, finishing a a second behind victor Max Fewtrell.

Hayek finished all three races with his best result a 10th in Race 3.

Leeds is the top Aussie in the championship lying fifth ahead of the next round at Thruxton from May 7-8. The Australian ended the weekend third in the championship standings after recording a fifth place finish in the final heat. Simon Evans claimed the final round of the BNT NZ Touring Cars Championship at a rain soaked Pukekohe.

Torrential rain forced the final race to be cancelled with just two laps completed before a Safety Car was called.

With conditions worsening, organisers elected to abandon the event with Nick Ross declared the winner from Mitch Cunningham.

In the end, Tim Edgell held off Cunningham to clinch second place in the championship after finishing fifth and second in the first two races. Alvaro Parente inherited the win in the Pirelli World Challenge

K-PAX Racing inherited the victory in round five of the Pirelli World Challenge at Long Beach.

Cadillac Racing’s Johnny O’Connell had taken the race win on the road but was handed a post race 10 second penalty for a technical infringement.

As a result, K-PAX Racing’s McLaren of Alvaro Parente took the win from O’Connell, who was demoted to second with Patrick Long third in EFFORT Racing Porsche 911 GT3 R.

The championship moves to Barber Motorsport Park this weekend.

Jordan and Ricky Taylor combined to win the latest round of the IMSA WeatherTech Sportscar Championship at Long Beach.

The Wayne Taylor Racing duo led all but three of the 75 laps to take the flag by 2.2s from the Corvette Daytona Prototype of Joao Barbosa and Christian Fittipaldi. 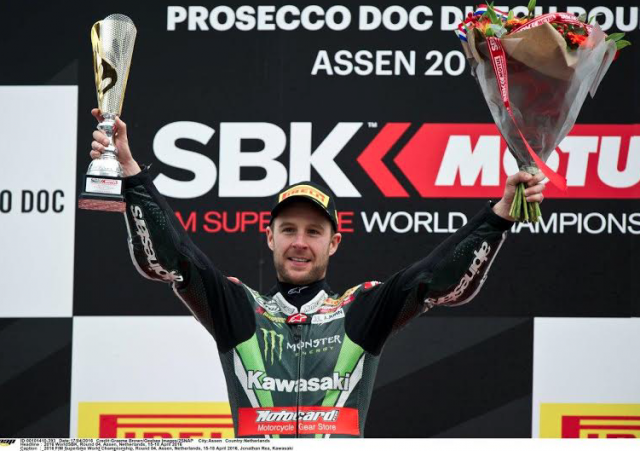 Jonathan Rea did the double in Assen

Rea repeated his performance in Race 2 as he took the flag by 2.4s from Kawasaki team-mate Tom Sykes and local hero Michael van der Mark.

Australian Josh Brookes finish 11th in Race 1 before retiring from the second encounter having led the early stages.

Rea leads Davies by 45 points in the championship standings.