Pye to let driving do the talking in silly season 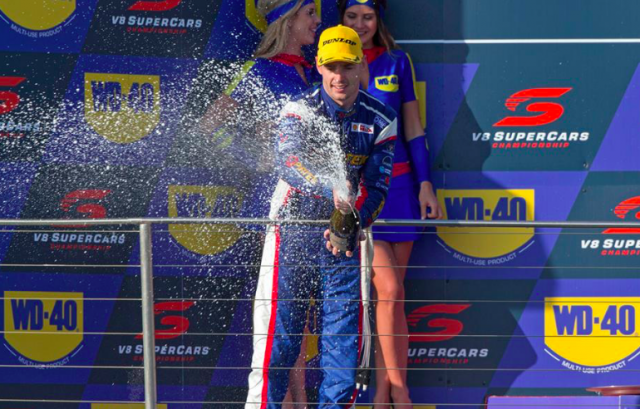 Scott Pye on the Race 7 podium

Scott Pye has laughed off uncertainty over his future at DJR Team Penske following the second podium of his career on Sunday at Phillip Island.

Early speculation that DJRTP is eyeing Scott McLaughlin for 2017 has raised questions over Pye, who is out of contract at season’s end.

Having run full-time at Dick Johnson Racing in 2014, Pye has already endured long periods of uncertainty since the American giant Penske took over the squad late that season.

He was initially dropped to co-driver duties for 2015 amid a move back to a single-car, before Marcos Ambrose’s shock exit threw the race seat back to the South Australian.

Pye then looked likely to lose his drive to Fabian Coulthard for this year, before a relatively late decision by Penske to expand to two cars saw him continue.

Amid speculation over McLaughlin, the team has publicly stressed that it will again give Pye until at least Bathurst to earn himself a fresh contract.

Having cut management ties with Roland Dane during his time at DJRTP, Pye says he’ll do his best contract negotiations on the track.

“Usually I get at least four rounds into the championship before this comes up,” he said when asked of his future after finishing third in Race 7.

“Every single year I’ve been involved in this.

“But like Scotty (McLaughlin) I’m managing myself now and I feel that the best way to do that is by doing well in the race car.

“I’ve felt like I’ve kept it out of my mind. This weekend is one of the best weekends I’ve had in a long time.

“The best thing I can do for myself is do the job in the car and not worry about the rest of it.”

Pye moved from seventh on the grid to third in Race 7 despite spending the entire 200km without a working radio.

“The first pitstop was my call when to come in and I’m a driver, I don’t do that kind of thing very often,” he explained.

“I was watching the guys behind and in front, seeing what they did and fortunately when we pulled in it was ok.

“Then we got the (pit) board working pretty well and we were ok from then on.”

Pye ran third behind eventual winner McLaughlin and Jamie Whincup at the final restart, but lost a place to Mark Winterbottom just as the Red Bull Holden ran wide.

The third place result came after a tyre failure just four laps from home cost a top 10 finish on Saturday.

By contrast team-mate Coulthard finished third on Saturday before an engine problem on the way to the grid put paid to a fourth placed grid slot on Sunday.

Pye and Coulthard are 12th and 15th respectively in the standings after seven races.