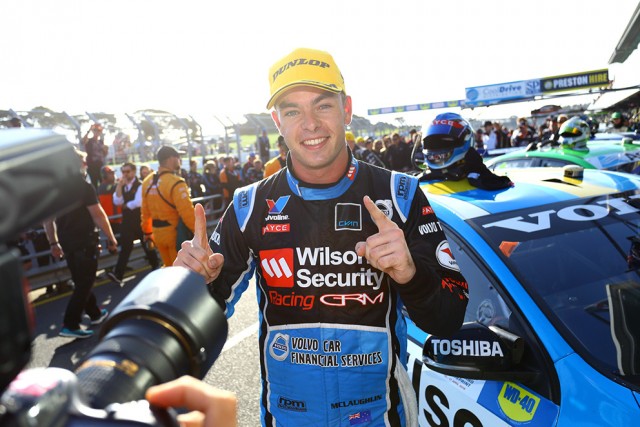 Scott McLaughlin silenced those doubting his ability to perform under the V8 Supercars silly season spotlight with a career best weekend at Phillip Island.

McLaughlin capitalised on his Volvo’s affinity for the fast, flowing Phillip Island venue by converting two Armor All Pole Awards into a pair of race wins.

As well as breaking a long victory drought, the results marked the first time McLaughlin has won back-to-back races and the first time the team has achieved the feat since 1999.

McLaughlin had arrived at Phillip Island on Thursday amid a storm of speculation over his future as he weighs up reported interest from DJR Team Penske and Walkinshaw Racing.

The 22-year-old has spent all four of his V8 Supercars seasons to date at Garry Rogers Motorsport, where he initially worked as an apprentice fabricator during his rookie season.

McLaughlin shot to prominence in a breakout season with the then new Volvo in 2014, before a horror run of mechanical failures last year brought the squad back to earth with a thud.

“It’s been an amazing week,” McLaughlin reflected after winning Race 7.

“They’ve been through thick and thin these guys. We obviously had a pretty good year in 2014 but 2015 was a write-off for us.

“To bounce back like we have this year and then have a weekend like this, I’ve never had it in my career. It’s been amazing.”

With clarity on his future not expected for some time, McLaughlin faces the prospect of a somewhat awkward season at GRM.

“I’ve just got to keep doing what I can for the team,” he said when pressed on his plans.

“I’m not really sure what I’m doing at the moment, honestly.

“I’ve had a fantastic time with Garry, he brought me up and ideally I’d love to win a championship for him, but at the end of the day results and other things speak.

As for the distraction of contract talks and media speculation, the self-managed McLaughlin says the weekend is proof he can balance both while giving his best on the race track.

“Once I put the helmet on I feel like I’m pretty comfortable in my own space and I just get on with things,” he said.

“All of that stuff will sort itself out during the year, but it obviously doesn’t affect me.

“There was a lot of chat about it earlier this week, but I’m looking forward to just getting on with things at the next round and moving forward.”

McLaughlin closed to within 15 points of championship leader Jamie Whincup with his double win, raising hopes that he will be a genuine title contender this year.

The team’s reliability woes don’t appear to be entirely behind it, however, with McLaughlin having already suffered from an engine problem at Symmons Plains and power steering issues at the non-championship Albert Park meeting.

“I don’t want to curse us but we’ll just take every race as it comes,” he said of the championship.

“I’m not even worrying about it at this stage, I’m just trying to maximise what I have at the race track.”