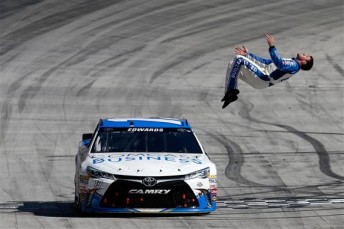 Edwards celebrates in his customary way

Carl Edwards has broken through for his first win of the NASCAR Sprint Cup season with a dominant performance at Bristol Motor Speedway.

Starting off the pole, Edwards led a total of 276 of the 500 laps contested; and not even a late race caution could stop the Joe Gibbs Racing Toyota driver.

The result was Edwards’ fourth win at the ‘World’s Fastest Half-Mile’ and the fourth victory for JGR in the opening eight races contested this season.

“Just awesome. Now we’re in the Chase and we can go have some fun,” said Edwards. “That’s just so cool.”

Although it appeared an easy win, there was some tyre concerns after issues his three Gibbs team-mates all suffered tyre failures.

“There was some concern,” said Edwards. “But for some reason with our car we didn’t have any of those issues.

“This team doesn’t quit. And (crew chief) Dave (Rogers) is awesome. He can almost read my mind during a race.

“He’d tell me things during the race right when I needed them. So it was just a great day.”

Bristol was the usual mix of short and long runs as a total of 15 caution period occurred.

The final hit forcing the points leader coming into the race, out and a 38th place result. He is now back to fifth in the points.

“Guess it just wasn’t meant to be,” said Busch.

“We drove up from the back to the front a couple times and showed them what we’re made of, but unfortunately it doesn’t matter when you’re in the garage.”

Matt Kenseth found the fence twice after front tyre failures, while Denny Hamlin had a front-right corner come off the car after contact with the wall, before he also had a tyre failure.

Issues for teams were not limited to the track with pit road penalties for the likes of Brad Keselowski and Jimmie Johnson for speeding, while Joey Logano’s team for losing control of a tyre.

This meant a somewhat mixed-up top-10 with Dale Earnhardt Jr. coming back from early electrical issues to finish in second ahead of Kurt Busch and Chase Elliott. While Matt DiBenedetto claimed his first top-10 of the season in sixth place.