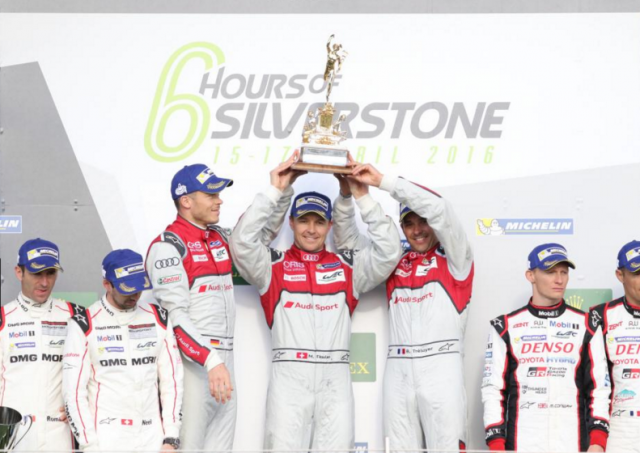 Audi has taken victory in a hectic opening round to the World Endurance Championship at the Silverstone 6 Hours.

The polesitting #7 R18 etron quattro of Marcel Fassler, Andre Lotterer and Benoit Treluyer had 46s to spare over the #2 Porsche 919 Hybrid of Neel Jani, Romain Dumas and Marc Lieb after a tense battle.

Toyota’s all-new TS050 crewed by Mike Conway, Stephane Sarrazin and Kamui Kobayashi was third after it played second fiddle for two-thirds of the race to the sister car which sustained a puncture followed by a costly pit stop.

Porsche suffered a bitter blow to the defence of its twin driver’s and manufacturer’s WEC crowns with the #1 919 crashing during its second stint.

Mark Webber worked through to the lead from the #7 Audi before handing it over to Brendon Hartley who stretched the advantage.

However just over two hours into the race Hartley was passing the GTE Am class Gulf Porsche of Michael Wainwright with the resultant crash forcing both machines out of the race.

A series of setbacks including a costly puncture conspired against the sole remaining #2 Porsche 919 from getting the advantage over the #7 Audi.

“I was always informed about the time gap with the Porsche that was chasing me,” Fassler said.

“I managed to control the advantage well because the way our Audi R18 felt was awesome.”

At just over half race distance the #8 Audi of Oliver Jarvis, Lucas di Grassi and Loic Duval was forced out with a terminal issue to its hybrid system.

In the LMP2 ranks, Bruno Senna, Filipe Albuquerque and Ricardo Gonzalez scored the win in the RGR Sport by Morand Ligier-Nissan JSP2.