Vettel hits out at Kvyat for Turn 1 crash 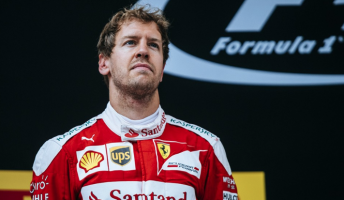 Sebastian Vettel has heavily criticised Daniil Kvyat following a clash on the opening lap of the Chinese Grand Prix.

The Ferrari driver confronted the Red Bull man after Sunday’s race as he blamed the Russian for causing a collision with Kimi Raikkonen at the first corner.

Kvyat dived up the inside of Vettel which saw the four-time world champion indadvertedly swerve and touch the rear of Raikkonen’s Ferrari, damaging the Finn’s front wing in the process.

The incident was not investigated by the stewards but Vettel maintained throughout the race that Kvyat was at fault, describing the move as ‘suicidal’.

Vettel, who went on to recover to finish second, accused Kvyat, who claimed third, for ‘driving like a crazy’ as the pair prepared to appear on the podium.

Below is the full exchange from the confrontation between Vettel and Kvyat.

Kvyat: “What happened at the start?”

Vettel: “You, asking what happened at the start!? If I don’t go to the left you crash into us.”

Vettel: “Yeah racing, but if I keep going the same line, we crash.”

Vettel: “Well there was a car on the left also, that’s why…”

Kvyat: “Oh yeah I can see all the three cars, man, come on! I have only two eyes, two cars.”

Vettel: “We crash if you do that.”

Vettel: “No, you didn’t! I know it’s racing but if you attack like a crazy you can damage the car … You were lucky this time. There was damage to Kimi.”

Kvyat went on to admit his move was risky during the following podium interviews before backing his decision to attack at the start.

“I had a really good start and, you see a gap and you go on the inside, in the end you see only one car,” said Kvyat.

“It was a risky move, I agree with Seb, but these kinds of moves can give you the podium, he is on the podium, so it is fine.

“I willl keep risking like that, people can expect that.”