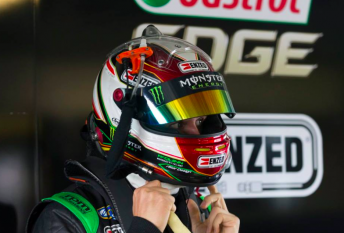 Waters became the fourth and final victim of a right-front failure across the weekend when his tyre gave way with little over 10 of the race’s 45 laps remaining.

Despite contact from a close following Andre Heimgartner, the youngster was able to remain in control of the Monster Ford, limping back to the pits, before going on to finish in 23rd spot.

Tyres had been a major talking point in the paddock following failures for DJR Team Penske’s Scott Pye and Prodrive’s Chaz Mostert in Saturday’s race.

A subsequent investigation by Dunlop and V8 Supercars failed to draw a conclusive reason for the issues, with debris dragged up from inside the kerbs thought the most likely cause.

Waters said his team found broken chords on the right-front he had used in the middle phase of the race before suffering the failure in the third stint.

“I didn’t know what was happening, I was just going down the straight and heard this massive bang,” said Waters.

“I took my foot off the throttle and got hit from behind. It was a bit of a wake-up call.

“I don’t know why it failed but it obviously isn’t a lot of fun when it happens at 250km/h.” The Monster Ford limped back to the pits

“It was obviously a big surprise,” said Heimgartner when asked of his view.

“I was already right up behind him and had no idea that it was a tyre, so when it blew it was lucky we didn’t have a big crash.

“We made significant contact. It could have been a lot worse.”

Waters’ failure left engineers to warn their drivers to be wary of their right-front over the final dash to the flag, a caution that even team-mate Mark Winterbottom said was difficult to adhere to.

“The worst part is that they get on the radio and say look after the tyre and you’re like ‘nah, bugger this I can pass some cars’,” he said.

“So you end up on all the kerbs, cutting corners and it gets home.

“You take the risk and at the end of the day you’re hopeful that the black things are up to the challenge.”

While Dunlop technicians and V8 Supercars technical staff were seen examining tyres at DJRTP in the lead-up to the main race, Pye said that his team did not take a conservative approach into the race.

“We had a tyre in qualifying that had a little nick in it after one lap,” said Pye, who took the flag in third.

“We got Dunlop down straight away to check that out and they said it was not going to be an issue.

“With our set-up, I told our engineers that I was comfortable to run the set-up that I had yesterday.

“One thing was I made sure I didn’t cut any insides of kerbs today because that’s the thing you can do as a driver.

“But those things (tyre failures) happen and I didn’t want to go changing our set-up today to accomodate something we were worried about.

“We needed to make sure we had a fast race car.”