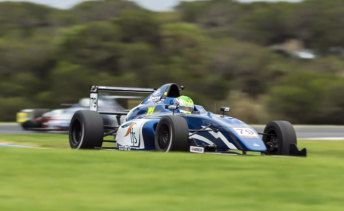 Jordan Love claimed the round win

Jordan Love has claimed Race 3 and the round in the CAMS Jayco Australian Formula 4 Championship.

Love battled with Nick Rowe during the first half of the 10 lap race before finding a way past at Doohan Corner.

Will Brown passed Brown for second shortly after, and so they ran to the chequered flag.

Round 3 takes place at Sydney Motorsport Park on July 1-3. 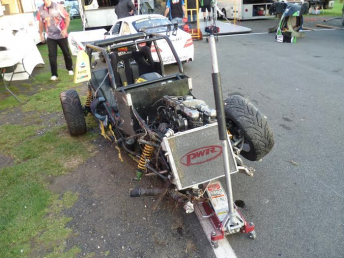 The wreckage of Chris Stevenson’s car

Chris Stevenson experienced a spectacular rollover as Trent Young took out the final race in the Aussie Racing Cars at Phillip Island.

Entering the fast Hayshed on the final lap, Stevenson was touched on his inside by Zach Best and launched into a series of rolls before coming to rest in the infield.

The Advantage Motorsport driver extricated himself from the wreck afterwards.

Kel Treseder inherited the early lead when Ben Walsh ran wide at the first corner, hitting Brendon Pingel on his outside and causing both the front row starters to spin off.

Young took over first place at the hairpin on the opening lap, and regained the spot when Treseder attempted to return the favour the next time around.

The Safety Car appeared shortly after when Ruth Bowler and Ian Chivas came to grief.

Young pulled away at the restart for a fifth race win at Phillip Island in the last three years.

Treseder’s second place finish gave him a maiden round victory, having just beaten James Duckworth and Adam Uebergang to the line. 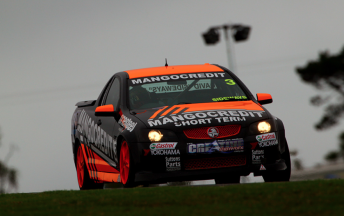 David Sieders took out the final race of the weekend

David Sieders has come from behind to win Race 3 and Round 3 of the V8 Utes Racing Series.

Kim Jane took an early lead from pole while Sieders wasted a good start when he ran off at the first corner and dropped from second back to his grid position of fourth.

Jane led early on while Craig Dontas pitted from third with his Kitten Commodore wheezing smoke.

Sieders picked off Nathan Pretty on Lap 5 of 9 and was on Jane’s hammer a lap later when the Bob Jane T-Marts Commodore ran well wide at the hairpin.

Jane did the same later that lap as he skated off completely at MG and fell to fifth, leaving Sieders to pull away to a comfortable victory.

Pretty beat Ryan Hansford to the second place by three thousandths of a second.

The series reconvenes for Round 4 at Winton from May 20-22.