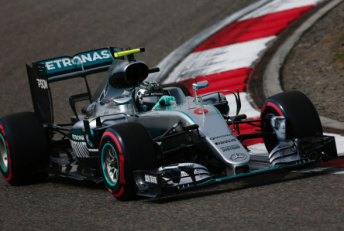 The Mercedes driver maintained his perfect start to the season, producing a faultless performance after avoiding a chaotic start at the Shanghai International Circuit.

Rosberg emerged in second behind the fast starting Red Bull of Daniel Ricciardo as the Ferarris of Sebastian Vettel and Kimi Raikkonen collided at the first corner of the opening lap.

Vettel hit Raikkonen as he reacted to Red Bull’s Daniil Kvyat, who slid down the inside of the Ferrari.

A left rear puncture for Ricciardo brought out the Safety Car on lap three and gifted Rosberg the lead, which he held for the remainder of the race, as he opened up a 36 point lead in the standings.

Despite making contact with the rear of Raikkonen, leaving the Finn with a broken front wing, Vettel produced an impressive fightback through the field to claim second.

Red Bull’s Daniil Kvyat, who started sixth, held second for the best part of the race before he was edged by the Ferrari in the final quarter and was left to settle for third.

Kvyat made the most of the hectic start to occupy second in the early laps and was able to maintain a strong pace throughout the encounter to pick up his second podium of his F1 career.

Ricciardo backed up Red Bull’s pace with a highly impressive comeback drive after his early drama while leading.

Having been forced to pit for a new front wing following contact with Vettel, Raikkonen made steady progress through the field before a final stint on soft tyres saw him pass Hamilton and Massa to claim fifth.

It proved to be an eventful race for Hamilton who visited the pits on five occasions on his way to seventh spot behind Williams’ Felipe Massa.

The reigning world champion, who started from the back of the grid, was caught up in the first corner incident on the opening lap, which resulted in a damaged front wing after contact with Sauber’s Felipe Nasr.

Massa, who ran as high as second after the Safety Car, struggled in the second half of the race but was just able to hold off Hamilton.

A rapid final stint from Verstappen saw the Toro Rosso man fight his way to eighth with a penultimate lap pass on Valtteri Bottas.

Bottas faced severe pressure from Carlos Sainz on the final lap and subsequently lost ninth to the Toro Rosso driver.

Force India’s Sergio Perez missed out on points in 11th in front of the McLarens of Fernando Alonso and Jenson Button, who both enjoyed periods in the top 10 during the race.

Esteban Gutierrez was the top Haas F1 runner in 14th as team-mate Romain Grosjean battled issues with his car.

Next Story Vettel hits out at Kvyat for Turn 1 crash