McLaughlin doubles up at Phillip Island

McLaughlin doubles up at Phillip Island 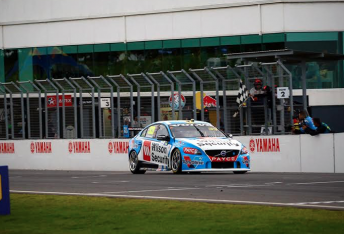 Not even a late Safety Car could stop Scott McLaughlin from scoring back-to-back victories for Volvo at the WD-40 Phillip Island Super Sprint.

A day after snapping a 44 race winless streak, McLaughlin was able to control the 200km Phillip Island finale from pole position.

The 22-year-old held a comfortable two second lead over fellow front-row starter Jamie Whincup when the Safety Car was called with just over 10 laps to go.

Yellows flew to clean up debris from Cameron Waters’ Falcon, which spectacularly suffered the fourth right-front tyre failure of the weekend while on the front straight.

While the Safety Car allowed Whincup to close onto the tail of the leader, it was the six-time champion who faltered on the restart lap, running wide at Turn 12.

Mark Winterbottom swooped on both Whincup and Scott Pye to move into second, subsequently taking the flag a second behind the victorious McLaughlin.

Pye held off Triple Eight duo Whincup and Craig Lowndes for third on a trying day for DJR Team Penske.

Team-mate Fabian Coulthard crawled away from his fourth place grid slot with an engine problem that took the #12 Pirtek Ford out of the contest.

Filling fifth through 10th at the flag were Michael Caruso, James Courtney, Chaz Mostert, Will Davison and Shane van Gisbergen.

Van Gisbergen ran as high as fourth early but struggled for balance in the middle stint and was down in 12th when the Safety Car was called.

The Kiwi was one of three to elect for a third stop under the yellow, subsequently charging from 20th to 10th in the closing laps.

Team-mate Whincup had by contrast been the only man in McLaughlin’s league for the majority of the 45 lap race.

A determined Whincup attempted to hang on around the outside of McLaughlin at Turn 1 on the opening lap, sliding wildly through the grass on the exit before rejoining still in second place.

There was more action later on the opening lap when Mostert was turned around by Garth Tander at the Turn 4 hairpin.

Mostert blazed back through from last to an eventual eighth, but will likely be the subject of a post-race investigation after a late touch on James Moffat.

Moffat finished 15th after the contact from Mostert and subsequent off at Lukey Heights, providing a disappointing end to a highly encouraging weekend for the former Nissan driver.

The Race 7 result sees McLaughlin move to second in the championship, just 15 points behind leader Whincup.