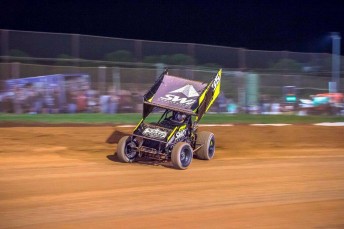 Jamie Veal on his way to USC victory

Victorian, Jamie Veal has continued his outstanding year in Australian sprintcar racing by securing the first ever Ultimate Sprintcar Championship.

The virtually unstoppable Veal fought his way back through an angry pack in his number 35 rocketship to score victory in the inaugural Grand Final of the Ultimate Sprintcar Championship at Sydney’s iconic Valvoline Raceway.

Veal had to work hard for the win – being pressured the entire Grand Final distance by Sydney regular, James Thompson and young country New South Wales star Jackson Delamont, both completing the podium in an action-packed final race of the year. 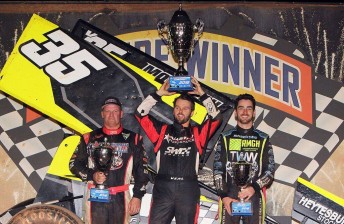 The race was stopped twice as a result of two big rollovers from Jordyn Brazier and Daniel Sayre respectively.

A relentless Veal strategically worked his way from mid-pack to the front, picking off opponents one-by-one to eventually secure the lead with just 3 laps to run.

Planning is now full steam ahead for the 2016-2017 season of the USC with further expansion beyond Sydney, Toowoomba and Warrnambool on the cards.