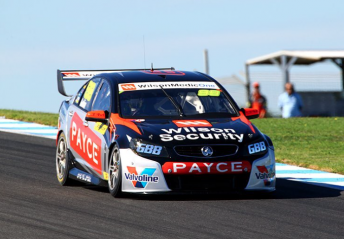 The Garry Rogers Motorsport protégé completed a lights-to-flag run to victory, while Race 1 winner Garry Jacobson ran a distant second for the duration of the 16 lap affair.

Golding made a good getaway while Jacobson dropped in behind Paul Dumbrell as Todd Hazelwood fell from fourth to eighth with a poor launch.

The Payce-backed driver had gapped the field by 2.6s by the end of the first lap as Dumbrell ran extremely defensive towards Jacobson.

The Prodrive Racing Australia driver made his move into the second lap courtesy of a slipstream off car #88, leaving Andrew Jones to zero in on Dumbrell.

That battle between the two former series winners made for a frantic Lap 3 as Dumbrell and Jones ran line astern to the Hayshed, before being divebombed at MG.

Jack Le Brocq attempted to buy in but instead tangled with Richard Muscat as the pair rounded the Turn 12 sweeper and while Le Brocq somehow managed to not spin, Muscat ran off and nudged the wall.

As that unfolded, Hazelwood’s race went from bad to worse when he was turned around by Bryce Fullwood in an incident which will be investigated post-race.

Dumbrell ran wide at Doohan Corner on Lap 6, hastening Le Brocq’s seemingly inevitable pass for fourth, and with Golding managing a gap peaking at 4.8sec, the front-runners ran unchanged for the balance of the race.

Hazelwood eventually managed 15th and Muscat was 25th and last, one lap off the pace.

Golding, who scored the first win for a VF Commodore, moves into second in the series behind Jacobson ahead of a further 16 lap race to complete the round at 1255 AEST.