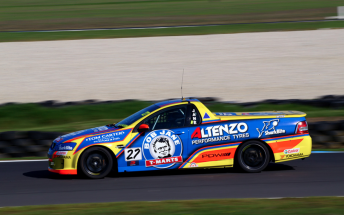 Kim Jane and Mason Barbera have taken a race win each in Round 2 of the V8 Utes Racing Series at Phillip Island.

Jane qualified on pole and just beat Craig Dontas to the first corner in Race 1 as the pair touched mirrors, and was never headed despite Dontas’ best efforts.

David Sieders dropped from third to fifth on the opening lap, but re-passed Barbera on Lap 3 when the 18-year-old got loose off Stoner Corner and was slow to the hairpin.

He pressured Nathan Pretty on the tenth and final lap but could not find a way back up to third.

The full reverse grid Race 2 commenced with Richard Mork making one of the greatest jump starts in many years, bolting before the red lights had even illuminated.

Barbera thus had the effective lead when he emerged in second from the Southern Loop on the opening lap and drove away to a maiden 5.5s win over the 10 laps, after Mork was unsurprisingly black-flagged.

Sieders took second after an impressive final lap battle with Pretty, the pair running side-by-side from Doohan Corner to the Hairpin before Sieders prevailed. 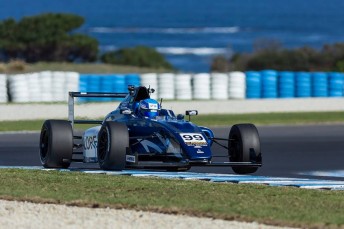 Jordan Love and Will Brown have shared the first two race wins in Round 2 of the CAMS Jayco Australian Formula 4 Championship.

Nick Rowe took an early Race 1 lead from pole position, but Love gained control of proceedings when he made moves at Doohan Corner on laps four and five, first passing Brown and then Rowe.

Love led the remainder of the 10 lap race, while Simon Fallon earned a P1 start for the reverse grid Race 2, with a final lap pass on fourth-placed Jack Smith.

Brown nevertheless led the field away from the outside of the front row for the second encounter and established a 1.1s lead by the end of Lap 2.

A rapid Love had climbed to the rear of second-placed Rowe’s gearbox when the West Australian spun off at Lukey Heights, necessitating a Safety Car.

Brown held on in the single-lap dash to the flag which followed despite the impressive pace Love had shown during the race. 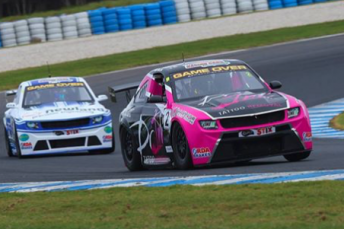 Ben Walsh has claimed a second Aussie Racing Cars race win in as many days while 14-year-old Zach Best took out Race 3 in a bruising conclusion at Phillip Island.

Walsh got the jump from the start but gifted the lead to Kel Treseder with an opening lap lock-up at the hairpin.

The two skipped clear as James Duckworth, Brendon Pingel, and Trent Young squablled behind, before Brendon Tucker dived from deep and took out Duckworth on Lap 4.

That left Pingel and Young to wage a two-car battle for the remaining four laps as a wounded Duckworth fell back to the next pack and Tucker retired.

Walsh regained the lead by slipstreaming off Treseder at the end of Gardner Straight and cleared out over the latter half of the race.

Best won the handicap Race 3 as a result of a backdating of results due to a Lap 5 pile-up.

The melee saw Glenn McNamara spin at the hairpin, causing a multi-car incident.

Mark Griffith’s machine caught fire as a result, though the businessman escaped any injury as he quickly drove to a fire marshal.

Round 2 concludes with a fourth race tomorrow at 1605 AEST.