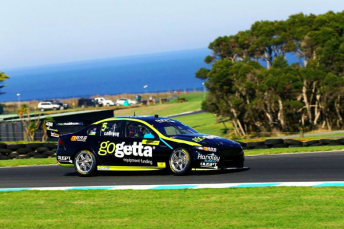 Jack Le Brocq edged Prodrive team-mate Garry Jacobson to pole position for Round 2 of the Dunlop Series at a slippery Phillip Island.

Sprinkles of light rain hit the high speed seaside circuit throughout the 20 minutes, adding to the challenge for the second-tier drivers.

Jacobson put down the first serious marker with five minutes to go, moving a full second clear of previous fast man James Golding at the top of the order with a 1:31.46s.

Jacobson and third placed man Todd Hazelwood both failed in their efforts to improve in the dying stages, ensuring pole for Le Brocq.

Golding drifted back through the top 10 across the closing five minutes before jumping back to fourth with his final lap.

Paul Dumbrell was the fastest of the non-Car of the Future runners in fifth ahead of Golding’s Garry Rogers Motorsport team-mate Richard Muscat.

The first of three Dunlop Series races for the weekend will get underway at 1515 local time.