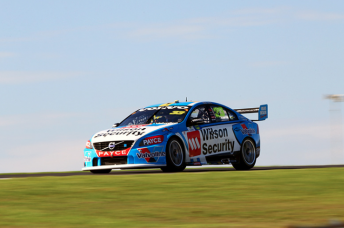 Drivers were able to complete two green tyre runs in dry conditions at the Phillip Island circuit as threatening rain failed to materialise during the 15 minute qualifying session.

McLaughlin recorded a 1:30.66s best to sit atop the order after the first runs ahead of Mark Winterbottom, Jamie Whincup, Fabian Coulthard and Shane van Gisbergen.

Mostert shot to P1 by recording a 1:30.65s with just over a minute remaining, before McLaughlin flashed by in 1:30.64s just 20 seconds later.

The result marks the first non-Ford pole of the season to date.

“It was so much fun, the car was amazing,” beamed McLaughlin.

“I’m so stoked for everyone here… it was a tough year last year and hopefully we are going to bounce back this year.”

Mostert, who struggled for speed on the soft tyres at Symmons Plains, was likewise pleased with his work.

“We didn’t know where we were coming out of practice so to be P2 I’m pretty ecstatic,” said Mostert, having sat just 18th after the first runs.

“The car feels good on the hard tyre, we’ve got some work to do on the soft, but I can’t wait to get out there in the race and see what we can do.”

Winterbottom, Whincup and Van Gisbergen also improved marginally on their second runs to end up third through fifth respectively.