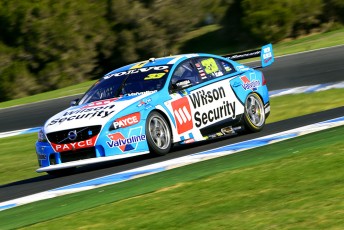 Scott McLaughlin has snapped a 44 race winless streak for himself and Volvo with a commanding victory in the opening heat at Phillip Island.

The 22-year-old made the most of his pole position, beating fellow front-row starter Chaz Mostert to the first corner.

McLaughlin was not headed outside of the pitstop cycle thereafter, eventually taking the flag 1.2s clear of second placed man Jamie Whincup.

“Jamie never makes it easy and for our car to hold on and control a gap was a big credit to the guys,” smiled McLaughlin afterwards.

“It’s been a tough gig for the team and myself over the last year, so it’s a massively satisfying day.”

Mostert dropped to third after losing out to Whincup early with a slow pitstop, before a right-front puncture caused an off at Siberia on the 27th and final lap, leaving the Ford to limp home 23rd.

The biggest beneficiary was DJR Team Penske’s Fabian Coulthard, who took a seemingly unlikely podium from ninth on the grid.

While the majority of the front-runners completed their single compulsory stop between laps five and seven, Coulthard bucked the trend by stretching his first stint until lap 10.

The Kiwi was able to pick off Craig Lowndes, Shane van Gisbergen and eventually Mark Winterbottom in quick succession thanks to his fresher tyres before inheriting third from Mostert.

Van Gisbergen overtook Winterbottom in the closing stages for an eventual fourth, while Lowndes banked more solid points in sixth.

Coulthard’s battle with Lowndes proved one of the highlights of the race, with the Ford taking the place with a bold dive to the inside at the high-speed final corner.

Scott Pye had appeared set for eighth place before his own right-front puncture caused an off and wild spin at Turn 1.

The two tyre issues allowed James Moffat to move to seventh in the second Volvo ahead of Tim Slade, Garth Tander and Jason Bright.

Brad Jones Racing produced its usual strategy of running a long first stint with all three of its cars, helping Slade and Bright to move up from 12th and 15th on the grid respectively.

Todd Kelly was the top Nissan in 11th after Michael Caruso’s sixth place grid spot was ruined by a poor start.

Dropping as low as 19th, Caruso fought through to finish one place ahead of Rick Kelly in 13th.

Another with a tough day was James Courtney, whose struggle for car speed was compounded by a dropped cylinder over the final laps.

The V8 Supercars will be back on track for qualifying and a 200km race tomorrow.