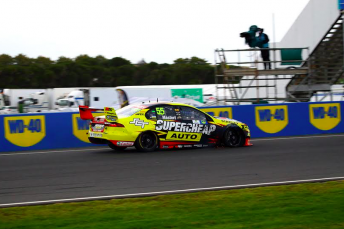 Dunlop is working with V8 Supercars’ technical staff and teams to investigate the tyre failures that hit two front-running Fords in Race 6 of the championship at Phillip Island.

Prodrive’s Chaz Mostert was robbed of a third place finish when his tyre went down on the final lap, pitching the Supercheap Ford off the road at Siberia.

The incident took place just a handful of laps after DJR Team Penske’s Scott Pye had a right-front failure at Turn 1 that saw the #17 Pirtek Ford spin across the infield grass at high speed.

While tyre failures are often foreshadowed by a vibration, both drivers said they had no warning of their impending fate.

Pye’s failure was undoubtedly the scarier of the two having taken place at the fastest point on the circuit.

“It was an instant flat tyre. I don’t know why, if it’s come off the bead or what’s happened, but obviously wasn’t a good spot to have it happen.”

Mostert suspects that the reason for the failures could be as simple as running over debris.

“There’s a lot of rocks on the track from the inside of the kerbs so maybe that’s what’s brought us undone,” he said.

“Hopefully they can sweep it up and it doesn’t happen to us again tomorrow.”

Mostert dragged his Falcon to the line in 23rd after rejoining from his off, leaving very little tyre left for Dunlop to examine.

Dunlop motorsport manager Kevin Fitzsimons says the control tyre supplier is investigating the issue but downplayed any concerns ahead of Sunday’s 200km race.

“We’re working with the category and the teams to find out as much as we can about what happened,” Fitzsimons told Speedcafe.com.

“There’s not much of either tyre (that failed) left so it’s hard to learn much from that.

“But we can go through the data with the teams and pull tyres off of other cars to see what we can learn ahead of tomorrow.”

“It’s too early to say conclusively but we don’t believe so,” he said when asked whether the team had been too aggressive on set-up.

“We’ll have a good look at it overnight, go through the data and see what we can make of it.

“We’ll regroup and bounce back tomorrow.”