Ricciardo gearing up for podium fight

Ricciardo gearing up for podium fight 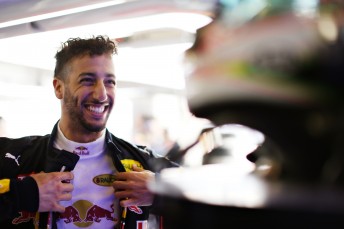 Daniel Ricciardo is setting his sights on a podium finish following his impressive showing in qualifying for the Chinese Grand Prix.

The Red Bull driver will start Sunday’s race from second on the grid having seen off a challenge from Ferrari drivers Kimi Raikkonen and Sebastian Vettel.

The Australian headed into the weekend fearing that a top five finish would be difficult with the Shanghai circuit not expect to suit his RB12.

However, qualifying showed impressive one lap pace from the Red Bulls with Daniil Kvyat backing up Ricciardo’s speed by claiming sixth on the grid.

While errors from Raikkonen and Vettel aided his run to second, the Western Australian believes he can take the fight to the Maranello team with a podium finish realistic.

“Today is encouraging. If we can have this on one lap then in the race we should still be pretty competitive,” said Ricciardo.

“We’re normally better off in the race.

“Hopefully we’ve a race with Ferrari. Nico (Rosberg) starting on the softs should be in good shape, so if we can battle for the podium that would be awesome.

“We’ve only had a couple of races, but up until now we’ve exceeded, maximised everything we’ve got, and we’ve shown true dry pace here.

“To get a front row in dry conditions is awesome and testament to how far we’ve come since the end of 2015.

“We have to try to keep going, but it feels good to be back up here.

“I know it’s only qualifying, but the plan is to be back here after the race.”

Ricciardo heads into the third round of the world championship lying third in the standings after fourth place finishes in Australia and Bahrain.