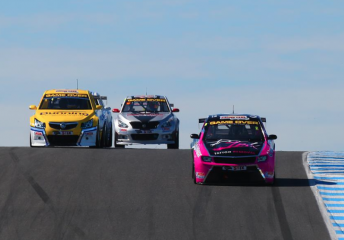 Ben Walsh on his way to victory Pic: Darin Mandy

Ben Walsh has taken a maiden Aussie Racing Cars race win to open the series’ second round at Phillip Island.

Walsh showed a clean pair of heels from his maiden pole while Trent Young joined Kel Treseder and Brendon Pingel in a four-way fight for the lead in the early stages.

That soon became a three-way fight for second with Walsh disappearing in the distance as Pingel, Treseder, and Young traded places during the opening laps.

Treseder resumed the position from which he started at the start of Lap 4 and stayed there for the remaining four laps as Walsh racked up a 2.5s victory.

The victory marked the 1998 International Asian Drivers Champion’s first since his overseas open-wheeling days and subsequent fifteen-year spell out of the sport.

Pingel placed third, Young was fourth, and James Duckworth rounded out the top five as he climbed from twelfth on the grid. 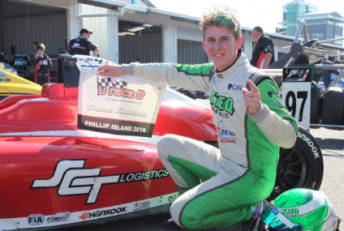 Nick Rowe will start the second round of the CAMS Jayco Australian Formula 4 Championship from pole position while Brenton Grove escaped a high-speed crash at Lukey Heights.

Rowe had usurped Will Brown to go to the top just before Grove brought out the red flag, but had to dig deeper afterwards when Jordan Love and then Brown went quicker again.

Grove’s car had broken free late in the corner and skated through the grass before a hard hit with the tyre-covered embankment.

Nine cars contested qualifying after Jordan McGregor’s day ended during Practice 1 when he also ran off and found the wall.

David Sieders pipped Jeremy Gray by two hundredths of a second in V8 Utes practice as the majority of the field set their fastest times during the first of two 20 minute sessions.

Ryan Hansford was third on combined times, with Mason Barbera fourth by virtue of his Practice 1 best despite topping Practice 2.

The V8 Utes qualify tomorrow at 950 ahead of the first two of three races for Round 2.