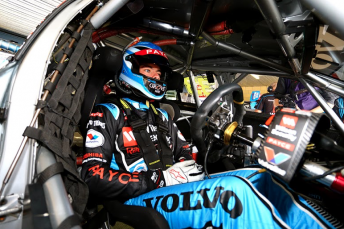 Amid growing speculation over his future with Volvo, McLaughlin’s Practice 2 effort underlined the potential for the marque to break its long victory drought at the fast and flowing venue.

McLaughlin and team-mate James Moffat ran one-two as the session entered its final third and, after being shuffled down through the top 10 as the new tyres came out, responded emphatically in the dying seconds.

McLaughlin then further proved his car’s speed with a second lap that, despite being polluted by traffic, was the second quickest of the session.

Fabian Coulthard put in a similarly late effort to end up second on the timesheets, albeit 0.63s adrift of the flying McLaughlin.

“I’m stoked but it’s early days yet, I don’t want to get too excited,” smiled McLaughlin post-session.

“We’re quite a bit under the lap record as well so it’s awesome finishing with that too.

“I wish it was qualifying but we’ll see how we go tomorrow.”

Van Gisbergen, who did not run new tyres in the closing stages, ended up third ahead of Will Davison, James Courtney, Mark Winterbottom, Cameron Waters, Scott Pye and James Moffat.

Moffat survived two off track excursions at Turn 2 during the session, both of which came immediately after setting fast times.

The 60 minutes was littered with offs as drivers pushed the limits, particularly at the tricky Southern Loop.

David Reynolds had the wildest moment of all, firing his Erebus Holden off at Turn 1 before running across the grass and rejoining at the following turn.