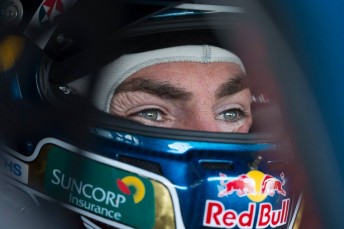 Craig Lowndes’ affinity with Phillip Island continued as the veteran set the fastest time in opening practice for the WD-40 Super Sprint.

The 41-year-old, who has 11 previous wins at the Victorian venue, was among the front-runners from the outset of the 60 minute session.

Emerging from the pits in the closing stages with a second set of pre-marked tyres, the Caltex Holden’s 1:31.73s proved 0.55s quicker than previous fast man Jamie Whincup.

Garth Tander split the two Triple Eight entries as the chequered flag fell, but could barely scrape within 0.5s of the flying Lowndes.

“The car went out of the blocks about 80 percent right,” said Lowndes afterwards.

“We made small adjustments and the car responded to its second set of used tyres.

“You never know what everyone else has done but the car is working well.”

Tander was meanwhile encouraged by further running with the Holden Racing Team’s front-end upgrades that were shelved partway through the Symmons Plains event.

“We still need to find a balance with the car but we found an upper limit with some of the changes,” said Tander.

“There’s not a lot of grip out there, you can tell by some of the lines people are using that they’re struggling.

“It’s old school Phillip Island, so maybe that’s why we (together with fellow veteran Lowndes) are up the top.”

Fabian Coulthard was the fastest Ford in fourth ahead of Tim Slade, Shane van Gisbergen, Rick Kelly and Scott McLaughlin.

Triple Eight trio Lowndes, Whincup and Van Gisbergen had traded the top spot throughout the opening 30 minutes, before Kelly broke up the domination just past halfway.

Van Gisbergen returned to the top with little over 10 minutes remaining, before Coulthard, Whincup and eventually Lowndes took over the front-running.

The session ran green for its duration, with a minor off for Whincup at Turn 2 the only notable off-track excursion.

Co-drivers Tony D’Alberto, Luke Youlden, Dean Fiore and Macauley Jones all cut laps in the early stages as they prepare for duties in the Pirtek Enduro Cup.

A second 60 minute session will complete the day’s running later this afternoon.