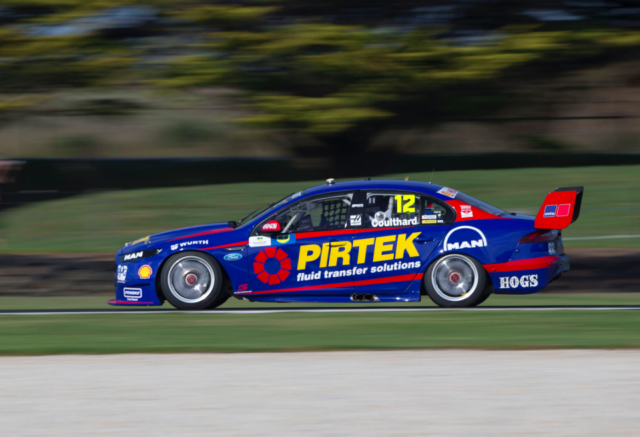 Coulthard on track at Phillip Island

Fabian Coulthard has labelled the prospect of DJR Team Penske adding a third car next year as ‘pretty extreme’ so soon after its recent expansion.

Among reports this week that Scott McLaughlin is being courted by the American owned squad have come suggestions that a third car could be added to accomodate the rising star.

While Speedcafe.com sources have declared the chances of the team running three cars next year as “close to zero”, Team Penske president Tim Cindric refused to rule out another expansion when asked about the prospect during his most recent visit to Australia.

This year’s addition of a second car saw Coulthard drafted in as a high profile signing to join existing driver Scott Pye.

Having previously run in three-car squads at Brad Jones Racing and Walkinshaw Racing with mixed success, the Kiwi stresses the need for DJRTP to grow into its current structure over time.

“We’ve only just branched from one (car) to two, so we’ve got a lot of new guys,” he said when asked in today’s post-practice press conference of a possible third entry.

“They need to just work together for a long period of time and we’ll be able to make the whole team move forward.

“In the short term three is pretty extreme. I’ve been in other teams where they’ve had three and four cars and it’s a lot of stress on the team.

“You’ve got to employ a lot more guys, more people coming away and things like that, so it comes with its pressures.

“The organisation’s smart, if they think it’s the right thing to do then they’ll look at it.

“But In the short term we have to focus solely on the two cars we have at the moment and get Scott and I closer to the front on a regular basis.”

Coulthard finished second fastest behind McLaughlin in today’s practice at Phillip Island, albeit a full 0.6s adrift of the flying Volvo.

“This is one of those tracks when the conditions are right and you get it right the margins can be massive,” said Coulthard of the gap.

“It’s got a big flow-on effect, you get through Turn 1 and the momentum carries through the rest of the lap and if you keep improving your time’s going to get better and better.

“We know we’ve got a little bit of work to do, it’s only my third round with the team and I’m still getting to grips with how to drive this car.

“But I’m pretty happy where we came from in Tassie. We’ve made good inroads but there’s still a lot more to come.”

Team-mate Pye ended the day ninth having elected not to use new tyres in the closing stages of Practice 2.