Raikkonen on top as Ferrari star in China practice

Raikkonen on top as Ferrari star in China practice 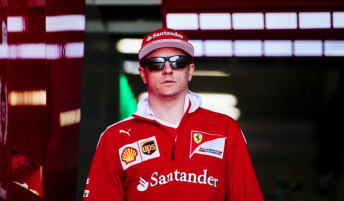 Kimi Raikkonen emerged as the man to beat as Ferrari showcased encouraging pace to claim a one-two in practice for the Chinese Grand Prix.

The Finn edged his four-time world champion team-mate Sebastian Vettel by 0.1s as the Maranello team pipped its arch Mercedes rivals in the second 90 minute session at the Shanghai International Circuit.

Raikkonen’s session best time came on the super-soft tyres with Vettel also utilising the same compound to post his effort early in the session.

Mercedes Nico Rosberg was third fastest 0.2s adrift of Raikkonen, with the German among the first to fit super-soft tyres in the hit-out.

Team-mate Lewis Hamilton was fourth a further 0.2s back but comfortably ahead of Red Bull’s Daniel Ricciardo in fifth.

Following a flurry of fast times early in the session, Ferrari and Mercedes focussed on long runs with the former electing to run lengthy stints on the super-soft rubber.

Mercedes however split its strategy with Rosberg running softs while Hamilton fitted mediums to his W07.

Fernando Alonso, who has received the all-clear to compete this weekend, ended the day in 11th position ahead of McLaren team-mate Jenson Button.

Felipe Massa recovered from an eventful opening practice to log 34 laps as he posted a time good enough for 14th position.

The Williams driver brought out the red flags early in the morning hit-out when his left rear tyre came off its rim sending him into a high speed spin.

The Brazilian suffered an almost identical tyre failure when the session resumed.

Pirelli claims the tyres suffered no signs of a puncture. Two wheel rim failures were suspected to be the cause of the problem before Williams blamed the issues on a set up error.

Renault’s Kevin Magnussen also suffered a tyre failure which is thought to have been caused by the debris from Massa’s incident.

However, investigations into the cause saw the Dane sit out the second session.

Qualifying for the Chinese Grand Prix is scheduled to begin at 1700 AEST.