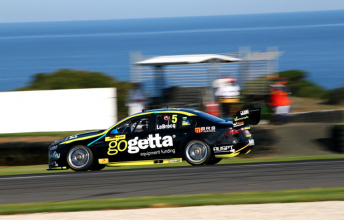 Jack Le Brocq has set the pace in Dunlop Series practice as the top 14 went under the practice record at the Phillip Island Grand Prix Circuit.

Taz Douglas, fastest during Practice 1, again set the best opening lap in the second session of the day in a one-off start for Eggleston Motorsport, before Shae Davies went to the top at the end of the first runs.

Dumbrell briefly claimed top spot before Le Brocq became the first to dip under the old practice benchmark in the series’ first visit to the Victorian circuit since 2007 with a 1:33.76s.

Davies resumed the top spot when he moved the mark to a 1:33.02s before Richard Muscat closed the gap to a tenth of a second at the half-hour mark of the 40 minute session.

Todd Hazelwood became the first to clock a 1:32 and looked set to stay at the top when Dan Day brought out a red flag just seconds later.

The South Australian lost the rear through the Hayshed with eight minutes remaining and ultimately came to rest in the Lukey Heights gravel trap as he backed his Image Racing Falcon up the hill.

However, the session went green again with just enough time for one more timed lap, a development which the bulk of the field took advantage of.

Macauley Jones was the first of those before Jacobson went quicker and Dumbrell improved on his outgoing record, but it was ultimately Le Brocq who was fastest of all as Hazelwood fell to fifth.

Practice 1 ran without interruption despite a number of offs highlighted by Macauley Jones’ fast run through the gravel exiting the final corner early in the piece.

The Dunlop Series returns to the track for Qualifying tomorrow from 1225 AEST.