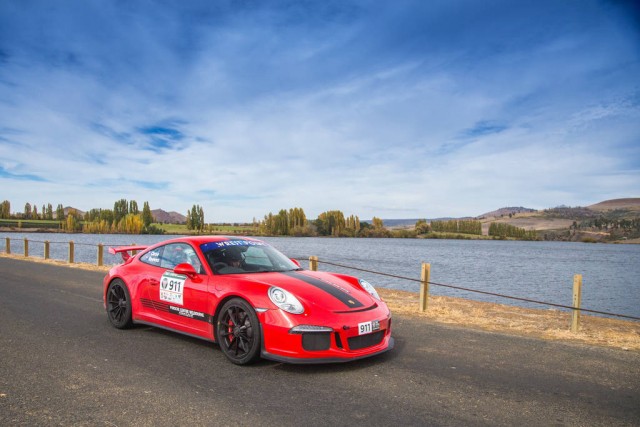 Matt Close is now the clear favourite to winning first Targa Tasmania title after his main rival Jason White retired with an engine failure mid-way through the penultimate day of the event.

White had extended the lead in the premium GT2 competition to 21 seconds after the day’s opening stage, but his Dodge Viper blew its motor on the long Mt Arrowsmith stage on the run from Strahan to Hobart; meaning Close’s Porsche 911 GT3 has a huge nine minute advantage.

“I’ve been in this position before with a day to go and that’s when you start listening for noises in your car,” said Close.

“It’s sad to see Jason out. Ideally it’s not what you want to see – you want to go out there and battle it out with the best.

“We had a strategy and plenty of rubber left for a battle tomorrow. Nothing would have made me happier than to be in a tight podium with Jason.

“While we can afford to cruise now, it’s sometimes easier to keep bit of speed up, otherwise you can just go off being lazy.

“You have to be so careful as it’s easy to make a mistake or pick up a puncture.”

After trading the lead for the first four days of the 25th anniversary Targa Tasmania, multiple winner, White, was clearly disappointed.

“I think an over rev of the engine in the Queenstown stage may be to blame. We’re gutted,” White reported.

Long-time Classic leader, Peter Ullrich, had a disappointing day and dropped from first to fifth after encountering problems with his 1963 Jensen CV8 leaving Leigh Achtenberg’s Porche in the lead.

In the Classic GT class, it was another good day for Jon Siddins and his 1970 Datsun 240Z. A Targa veteran, Siddins now holds a lead of five minutes and 20 seconds over the 1977 Ford Escort RS1800 of Keith and Mary-Anne Callinan,

The 1977 Holden Torana of Mick Downey and Jarrod Van Den Akker has moved up to third place at the expense of Barry Faux’s Mazda RX7, which is now fourth.

In other competitions, Brendan Winterbourn (Mitsubishi Lancer Evo X) has the lead in Modern, the Nissan Skyline GT-R of Jeff Beable is over five minutes in front in GT Sports Trophy, and in TSD Trophy it’s Brian Marshall out in front in a VW Polo GTI.

The Early Modern competition is being dominated by the Mitsubishi Lancer Evo 6.5 RS of Alan Roe, ahead of the Mazda RX7s of Mark Balcombe and Andrew Bollom.

The final day of Targa Tasmania includes six stages to the south west of Hobart, before the champagne finish at Princes Wharf No. 1.