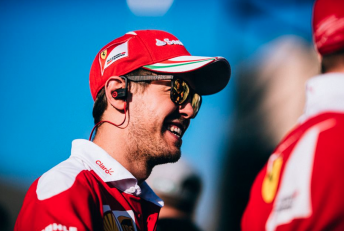 Sebastian Vettel believes Ferrari will challenge Mercedes for wins this year despite the team’s reliability issues that have hampered its start to the season.

The Maranello team has shown glimpses of its improved pace this year but this has been tarnished by race ending engine failures in Australia and Bahrain.

Four-time world champion Vettel failed to start the Bahrain Grand Prix after suffering an engine issue on the formation lap.

The failure came after Kimi Raikkonen was forced to retire from the season opening Australian Grand Prix with an airbox fire.

Vettel, who challenged for victory in Australia before a mid race red flag, says the recent reliability concerns has not shaken his belief in the team’s potential.

“We didn’t have the start that we wanted, which is not a big secret,” said Vettel.

“Kimi’s problem in Australia, obviously the engine failure in Bahrain, the performance is not yet where we want it to be.

“You could say there is some negatives, but there is nothing that shakes me or makes me nervous for this season or the next couple of races, because I know that this team is very strong.

“I know we can improve a lot so I’m confident and a strong believer that the potential is there.

“It’s a question of getting all of the ingredients together, which hopefully happens sooner rather than later.

“I’m sure we will be in a strong position to fight Mercedes hard this year.”

Meanwhile, Vettel, who will utilise his second power unit of his allocation this weekend, is confident the engine issue which struck him two weeks ago will not be repeated.

“It was a little part that caused the problem and turned into the biggest possible consequence,” he added.

“That was a shame. Obviously we have a new engine for this weekend and as I just said I don’t expect that issue to come up again.”

Opening practice for the Chinese Grand Prix is scheduled to begin at midday (AEST).

Next Story Ricciardo expects battle for top five in China