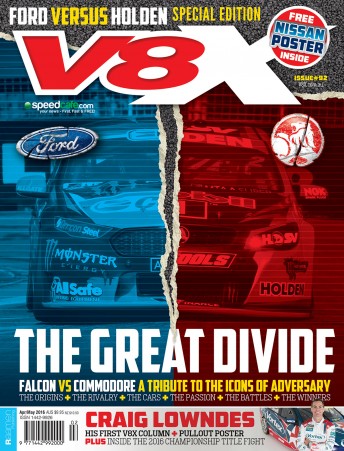 The print and digital editions of V8X Supercar Magazine issue #92 (April/May 2016) are on sale now.

V8X Supercar Magazine issue #92 is a celebration of the Ford Falcon and Holden Commodore and their impact on the Australian Touring Car Championship/V8 Supercars.

Included in the print edition is a two-sided pullout poster featuring Team Vortex’s Craig Lowndes on one side and Nissan Motorsport on the other.

The digital edition is also available in the official V8X app (in the App Store and Google Play), online at DigitalEdition, V8XMagazine.com.au and in the Magzter app store.

The Great Divide: Introducing the Falcon versus Commodore special edition.

True Blue: Where it all began for the Ford Falcon.

Lion Heart: Where it all began for the Holden Commodore.

Tech Battleground: How the Falcon and Commodore shaped up in the V8 era.

How Holden won the war: Why the Commodore got the better of the Falcon.

Top 10 Falcons: The most successful and influential Falcons.

Top 10 Commodores: The most successful and influential Commodores.

The Defectors: The most notable drivers to swap between Ford and Holden.

The Loyalists: The most notable drivers to stick with Ford or Holden.

Stars of Tomorrow: Introducing the young guns to watch in the Dunlop Series.

The future of the Ford versus Holden rivalry.

The records and milestones to track in 2016.

The latest headlines from Speedcafe.com.

Frosty on maintaining a competitive edge.

Rogers on future of V8s into the Gen2 era.