DJR Team Penske will rekindle memories of Marcos Ambrose’s glory years in the V8 Supercars Championship when it rolls out two Pirtek Fords at Phillip Island this weekend.

The WD-40 Phillip Island Super Sprint marks the first time since 2005 that the iconic Pirtek colours have adorned a V8 Supercar as a primary sponsor.

Ambrose and Pirtek won the 2003 and 2004 titles at Stone Brothers Racing before both the driver and sponsor departed the category with a double victory at the Island the following year.

Following an aborted V8 comeback with DJRTP last year, Ambrose will be at the circuit this weekend as part of Pirtek’s major marketing push around the event. Ambrose on the way to victory at Phillip Island in 2005

Fluid transfer systems firm Pirtek joined DJRTP as a minor sponsor at the start of last season as part of a growing business relationship with the Penske Transportation Group International.

“Pirtek have become a great partner of the race team and the Penske business in Australia,” said DJRTP managing director Ryan Story in announcing the Phillip Island sponsorship.

“We are very excited to bring such an iconic livery back to the V8 Supercars Championship.”

Expected to be a big hit with fans, the release of the livery is also an exciting moment for Scott Pye, who was in his early teens during Ambrose’s run of success in V8 Supercars.

“I was a fan of Marcos growing up and the Pirtek car was one of the only posters that I had on the wall,” Pye told Speedcafe.com.

“Last year getting to drive with him was really cool and I was always kind of hoping we’d get to do a livery like this.

“So it’s exciting for me and it’s just great to see Pirtek supporting the team in such a big way with two cars.

“Hopefully Fabian (Coulthard) and myself can put the cars at the front somewhere and do a good job for them.” 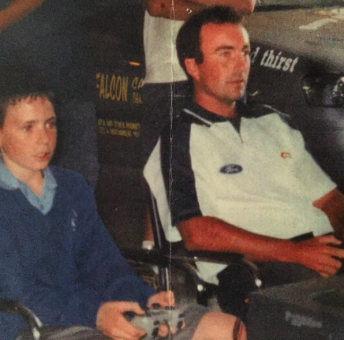 Pye met Ambrose at a Ford function in 2004. pic: @scottpye19 via instagram

Pirtek CEO Stephen Dutton says the company is excited to once again have a major presence in V8 Supercars and is encouraged by DJRTP’s improving form.

“DJR Team Penske has continued a steady march up the field and over the last 15 months,” he said.

“The move to two cars this year has increased the Pirtek branding and with Scott being joined by Fabian we are sure there is more success to come.

“From a business perspective, the relationship between Pirtek and the Penske Transportation Group International continues to grow.”

DJRTP blasted out of the gates at the season opening Clipsal 500, with Pye and Coulthard recording a pole position apiece.

While Coulthard was able to score a podium at the subsequent Albert Park meeting, both drivers battled in the midfield last time out at Symmons Plains.

“We need to get back to where we should be after a really tough run in Tasmania,” said Pye.

“I think we’ve got a really good base to roll out with which hopefully we can just tune over the weekend.

“It’ll be interesting to see the differences between outright speed and tyre degradation through the field.

“Last year I felt that the car speed was there in qualifying and we were quite competitive over the race distance, which is encouraging.”