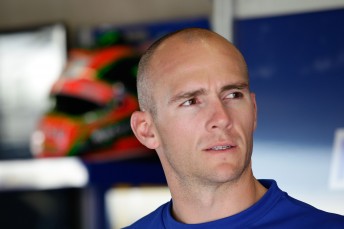 Lee Holdsworth will partner Stephen Grove for the Carrera Cup Australia’s Pro-Am round at the Porsche Rennsport festival later this month.

The Team 18 V8 Supercar driver has been selected by Grove after regular co-driver Scott McLaughlin ruled himself out of the event.

McLaughlin, who also partnered Grove at the recent Bathurst 12 Hour, will be absent from the event due to a scheduled trip to Sweden as part of his Volvo V8 Supercars commitments.

Experienced Carrera Cup campaigner Grove feels he has selected the best alternative co-driver in Holdsworth following a recent test for the event (April 29 – May 1).

“When Scotty told me he had duties with Volvo in Sweden that same weekend it was important that we went out and got the right person,” Grove explained.

“They obviously had to be quick but needed to have the personality to fit into the team like Scotty does and Lee was the natural choice.

“We tested last week and he was as quick or quicker than anyone there on the day. His ability to adapt to the car was incredible – within three laps he was right on it.”

Holdsworth is the latest V8 Supercar driver set to compete at the event following the confirmation that Red Bull Racing’s Shane van Gisbergen will partner Paul Kelly in a Scott Taylor Motorsport entry.

Having missed out on a chance to contest the 2013 Rennsport event, the Melbourne driver is looking forward to his Carrera Cup debut.

“They are an amazing car to drive and the grip they have is incredible. You can push to the limit and get rewarded and you can be aggressive and attacking driving the car.

“It’s like driving a go-kart – they’re stiff and you feel every bump and dip in the track.

“V8 Supercars is my main priority and what I focus on during the year but to do some driving outside of that is always fun and a chance to try your hand at something else.

“Hopefully I can help Steve out as much as I can with his championship. It will be good to go for a win but they will be tough races and very competitive.

“Steve is very competitive amongst the Challenge class drivers and I think we’ll be within a good shot at the top three or possibly a win.”