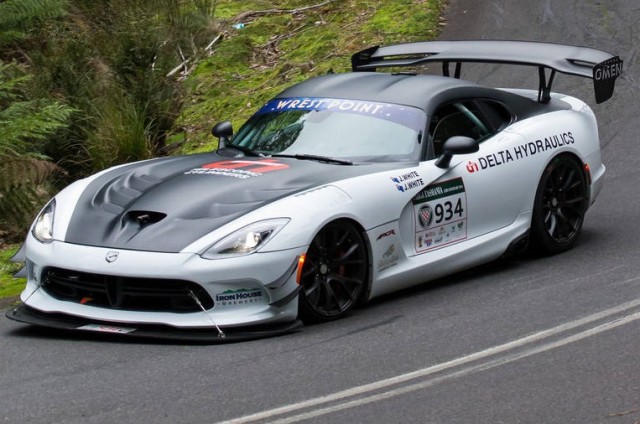 The Dodge Viper of Jason White holds a narrow 10 second advantage in the GT2 competition after the run from Burnie to Strahan on the fourth day of Targa Tasmania.

Last year’s winner went toe to toe with the Porsche GT3 of Matt Close. After leading by two seconds for most of the day, took an eight second win on the 20km Hellyer Gorge stage to increase his advantage with two days still to run.

Seven stages and 92km of roads greeted competitors on another a fine Tasmanian day, and as the event progresses, the odds are shortening on White claiming his sixth Targa crown.

In the battle for the minor placings in GT2, after Craig Dean crashed his Ford Mustang early in the day, Michael Pritchard lies in third place in a Dodge Viper, while the wily old fox, Jim Richards, has moved to fourth in his Porsche GT4.

“The changes we made to the suspension and wheel alignment last night made the car awesome today,” White said.

“If we had that set-up from the start of the event we wouldn’t have been concerned about tyre wear at all. We’re very confident now the tyres will make the distance, no worries at all.

“Now that we’ve sorted out tyre concerns we can push a bit harder and try to extend our lead.”

Another former winner, Steve Glenney in a Subaru WRX STI, increased his lead to over a minute in the GT4 competition, with the Lamborghini of Tony Quinn his nearest challenger.

Glenney held a 24 second advantage at the start of the day, but increased on that throughout as Ben Manion’s Subaru battled with Quinn’s Lamborghini. In the end it was brute horsepower that got the better of nimble handling, as Quinn moved ahead.

The Classic competition is still comfortably led by Peter Ullrich in his 1963 Jensen CV8, more than a minute clear of Leigh Achterberg’s 1982 Porsche 944, with Paul Freestone’s 1960 Aston Martin DB4 in third.

In other competitions, Jon Siddins leads Classic GT in his Datsun 240Z ahead of Keith Callinan’s Ford Escort, Brendan Winterbourn (Mitsubishi Lancer Evo X) has taken the lead in Modern, and the Nissan Skyline GT-R of Jeff Beable is over five minutes in front in GT Sports Trophy.

The Early Modern competition is being dominated by the Mitsubishi Lancer Evo 6.5 RS of Alan Roe, who is more than four minutes ahead of a the Mazda RX7s of Andrew Bollom and Mark Balcombe.

Day five of Targa Tasmania heads from Strahan to Hobart over six stages and 115 competitive kilometres. After the picturesque 33km stage out of Strahan tomorrow morning, drivers are then faced with the mammoth 51km Mt Arrowsmith test – one of the event’s favourites.