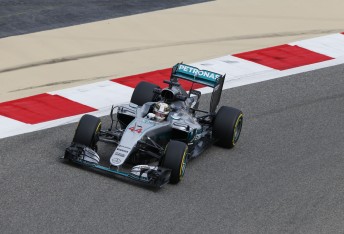 Lewis Hamilton will be hit with a five place grid penalty after a gearbox change ahead of this weekend’s Chinese Grand Prix.

Mercedes has confirmed that Hamilton’s gearbox suffered damage during the Bahrain Grand Prix which has forced the world champion squad to replace the component.

Hamilton was caught up in opening lap clash involving Williams’ Valtteri Bottas in Bahrain, with the impact affecting the pace of his W07 in the race.

“The gearbox of @LewisHamilton‘s #F1 W07 Hybrid sustained damage in Bahrain which required a physical inspection for full assessment,” said a post via the Mercedes F1 Team’s official Twitter account.

“Having done so, the decision has been taken to change the gearbox rather than carry any risk moving forwards.”

Hamilton heads into the Chinese Grand Prix with a 17 point deficit to team-mate and championship leader Nico Rosberg, who has won the opening two races of the season.