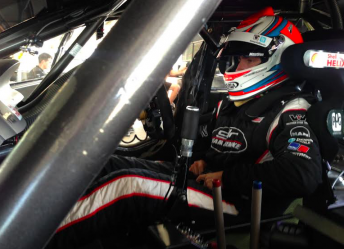 DJR Team Penske will run both of its co-drivers in practice at Phillip Island as part of a concerted push to maximise seat time ahead of the Pirtek Enduro Cup.

Tony D’Alberto and Luke Youlden are new signings to the team this year, partnering with Scott Pye and Fabian Coulthard respectively.

DJRTP was one of few teams to give their co-drivers an initial hit-out during pre-season testing and plans to allow the duo further laps at each of the six events where they are permitted between now and Sandown.

Brad Jones Racing is the only other squad to have currently lodged an additional driver entry for Phillip Island, nominating Dunlop Series runner Macauley Jones to cut laps in Tim Blanchard’s Holden.

“We’re taking every opportunity that we can to get Tony and Luke used to our cars,” DJR Team Penske managing director Ryan Story told Speedcafe.com.

“We’re aiming to run them at every sprint round at which they are permitted to drive.

“The seat time they will have at each meeting will be fairly limited, but it is all beneficial ahead of our dedicated test day later in the season.”

Although D’Alberto and Youlden are highly experienced in V8 Supercars, both drivers noted at the pre-season test that the FG X Falcons requires a unique driving style.

“It’s very different (to drive), but the good thing is that it’s clear what the strengths of the car are,” D’Alberto told Speedcafe.com.

“You’ve just got to adjust your style a little bit to make the most of it.”

Moving to DJRTP continues Youlden’s association with Coulthard and engineer Phil Keed, who also joined the Ford squad over the summer. 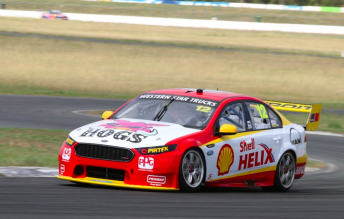 Youlden has followed Coulthard to DJRTP

Youlden showed impressive speed in the enduros last year despite not driving full-time in other categories, while D’Alberto is again keeping match fit in the Australian GT Championship.

“I don’t think I’ve got the right technique for it quite yet, but I’m looking forward to learning it over the year,” Youlden told Speedcafe.com of his first run in the Falcon.

“I’m not actually sure what my style is exactly, because you’re forever adapting to whatever the main driver’s style is.

“Driving with Fabs for three years helps, because he’s going through the learning process with the car at the moment, together with Phil.”

The February initiation saw the co-drivers spend multiple days in the squad’s workshop before hitting the track, settling them into ‘the Penske way’.

“It’s definitely a very serious vibe and a focussed vibe,” said D’Alberto of the team.

“It’s really noticeable both at the track and at the workshop. The attention to detail is very high and everyone is pushing very hard to be at the front.

“It’s such an exciting thing to see and be a part of as a driver.”

Now in his 17th year as a co-driver, Youlden says he’s thrilled to have added Penske to a long resume that includes stints at the likes of Stone Brothers and Prodrive.

“Coming from BJR, it’s no disrespect to them because Brad pumps the money into all the right areas, but there’s not a lot going into the presentation there,” he noted.

“Here there is money to do both, which you can see with the truck, the pits and the workshop.

“They do things to a very high level and I’m thrilled to be a part of it. It’s a massive deal to be driving here.

“My family still can’t believe I’m driving for a guy like Roger Penske.”

An additional set of pre-marked tyres is permitted for each car running a co-driver, who can take part in either of Friday’s 60 minute practice sessions.

Initially slated as a two-day meeting, discussions between V8 Supercars and Fox Sports recently saw the schedule expanded back to the regular three-day Super Sprint format.